Ezekwesili, who described the response as “messy”, asked Dabiri-Erewa to “clean it up”. 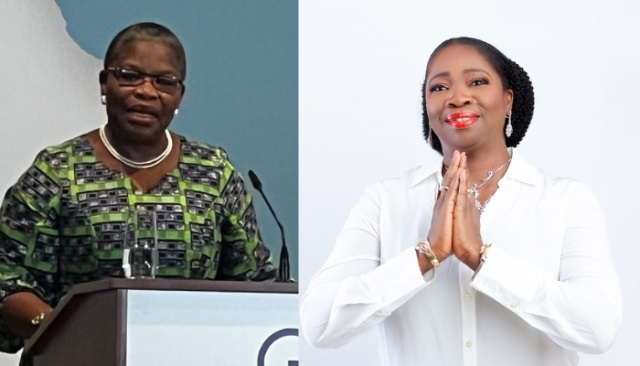 Former Minister of Information, Dr. Oby Ezekwesili has lashed out at the Chairman of the Nigerians in Diaspora Commission, Abike Dabiri-Erewa.
This comes after Dabiri was seen on Twitter exchanging bitter words with users of the platform.
Dabiri-Erewa had called a tweep ‘Ode’ (a Yoruba word for foolish person) while responding to the tweep’s comments about her.
Ezekwesili, who described the response as “messy”, asked Dabiri-Erewa to “clean it up”.
It all started on Monday when Dabiri-Erewa threw more light on a fracas that occurred at an Indian university, which also had students from Nigeria.
Dabiri-Erewa partly said, “Calm has returned to the campus. A few injuries were recorded, and further investigations are ongoing. The Nigerian mission had made it clear that the Indian authorities would be held responsible if anything happened to any of the students.
“There is already a written commitment by the Indian Authorities to protect our students. Any student feeling threatened should please report to the Nigerian mission in Delhi immediately.”
In the comment section, a tweep identified as @sensegiver1 said, “She should go to Indonesia and see how Nigerians are treated. Mumu (slang for foolish) woman supporting a failed government. She’s equally part of the failure. Eye service!”
Responding to the tweet, Dabiri-Erewa said, “Ode! You go to Indonesia, carry drugs, do cultism, and come begging to be rescued from death sentence . Thank God for NDLEA (National Drug Law Enforcement Agency) now saving people like you from death row.”
Reacting to the NIDCOM boss’ comment, Ezekwesili tweeted on Tuesday, “Dear Abike, What is this? Kai. This is messy. Please clean it up. Quickly. Please.”
Dabiri-Erewa, in her response to Ezekwesili said, “I’m done on this. But out of respect for you, I will ask, ‘Clean what up?’
“It’s okay for some untrained, uncouth guy to refer to me as ‘mumu’, and I can’t call him ‘ode’. I’m not a public official that cows to bullying, please.” 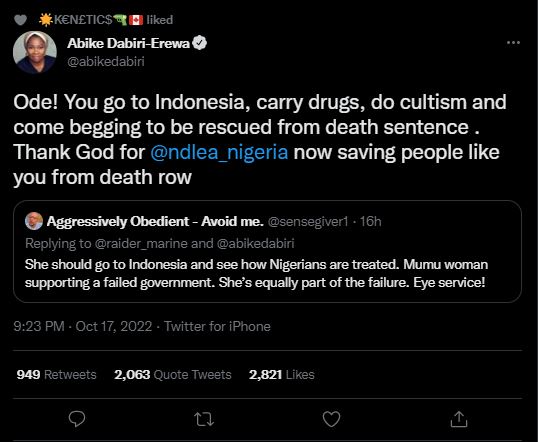