I Want to Buy Venza - Nigerian Lady Says As She Breaks Her Piggy Bank, Flaunts N291,000 She Saved (Video)


In the short clip, she said her heart was pounding because many people have reported missing money in piggy banks in recent times. 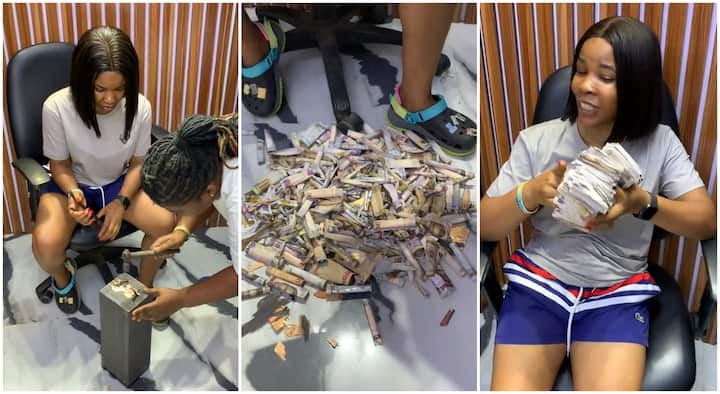 A Nigerian lady has revealed her plans after breaking her piggy bank aka kolo.
According to the Tiktoker Innocentia Olisa, she has been patiently saving money in it since 2021.
In the short clip, she said her heart was pounding because many people have reported missing money in piggy banks in recent times.
However, hers was intact as she counted many crumpled naira notes in different denominations.
She said she was saving the money so as to be able to buy a Toyota Venza for herself.
But at the end of the day, she realised the sum of N291k from the savings which is a far cry from the price of a Venza.
Watch the video below:

Social media reactions
Her video has encouraged people to save as they expressed their desire to do the same in the comment section.
@Dunford Joseph asked:
"How can I get that kind save?"
@user7225670561787 commented:
"Hmmm God help me by next year I will start mine ooo."
@Faniyi Omolara351 said:
"God bless you I need this type of save."
@Sani Hassan Tsaffi commented:
"You really try my sister."
Top Stories