The Working Group on arbitrary detention is under the United Nations Commission on Human Rights (UNCHR). 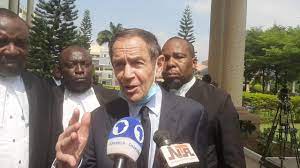 Bruce Fein, the American lawyer to Nnamdi Kanu, leader of the Indigenous People of Biafra has approached the United Nations over the refusal of President Muhammadu Buhari to release Kanu after Appeal Court gave the order.
Fein has demanded that Nigeria be suspended from the United Nations over the continuous detention of his client.
This was contained in a letter addressed to the International Working Group.
The Working Group on arbitrary detention is under the United Nations Commission on Human Rights (UNCHR).
The group comprises scholars and experts who specialise in human rights issues and related laws.
In the petition to the body, the lawyer insisted that the group recommend that United Nations Security Council should consider suspending Nigeria from the UN for allegedly violating the “Principles of the United Nations Charter and the Universal Declaration of Human Rights.”
Fein argued that it is against international law for a nation to kidnap, torture, and then subject a citizen to an extraordinary rendition to a different nation while travelling.
The letter read in part, “This letter chronicles the continuing contemptuous defiance of this Group’s 20 July 2022 Opinion regarding Nnamdi Kanu by the Federal Government of Nigeria. The chief culprits are Nigerian President Muhammadu Buhari and Attorney General Abubakar Malami.
“The Opinion requested the source to update the Working Group on the Government’s compliance.
“The Opinion found that Nnamdi Kanu’s detention, following kidnapping, torture, and extraordinary rendition, violates sixteen (16) international human rights covenants.
“The Opinion called on the Government of Nigeria “to take urgent action to ensure the immediate unconditional release of Mr. Kanu.
“Accordingly, Mr. Kanu respectfully urges the Working Group to inform the Human Rights Council of Nigeria’s violation of the above-referenced Opinion and serial violations of law generally as regards himself. Mr. Kanu further urges that the Group recommend that the United Nations Security Council consider suspending Nigeria from the United Nations for persistently violating the Principles of the United Nations Charter and the Universal Declaration of Human Rights until Nnamdi Kanu is unconditionally released as mandated by both international and Nigerian law.”
Top Stories