How I Faked My Kidnap, Targeted My Sister Abroad For Ransom Payment – 23-Year-Old Reveals


The young man, who was arrested by the police for allegedly faking his own kidnap, tells DAUD OLATUNJI the motive behind his action 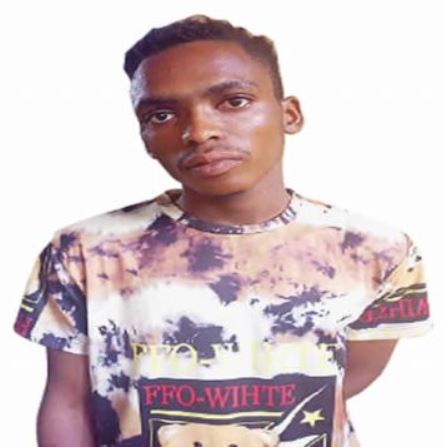 Okachi Edward, a 23-year-old secondary school leaver, has talked about how he faked his own kidnap.

The young man, who was arrested by the police for allegedly faking his own kidnap, tells DAUD OLATUNJI the motive behind his action

What is your name and how old are you?

My name is Okachi Edward.I am 23 years old. I graduated  from secondary school in 2018 but I couldn’t  further because my parents could not afford it.

What led to your arrest by the police?

I am here because I faked my kidnap with friends.  I needed money for a job I was introduced to. I was told I needed to register with N550,000. They said I would have to pay the money before they could employ me.

What is the nature of the job?

It is a networking job, involving bringing other people in. I was asked to pay the money for registration and form; But because I couldn’t raise the money, I planned with my friends to fake my kidnap so as to generate the money.

Who brought up the idea?

It was my idea because I was enticed by the job offer and I didn’t want to lose it. When I discussed the job opportunity with my friends, they asked me what we could do to get the money. After giving it much thought, I suggested that we could fake my kidnap. I thought that my family would be able to raise the money and I would use it to secure the job. My plan was that I would pay back the money and explain everything to them once I start earning from the job.

What made you think that was the best way to raise the money rather than tell your parents about this job offer and ask for their help?

I knew that it would be hard for me to convince my family to give me the money to start the business. I knew questions would be raised if I informed them about the amount I needed for the job; they would want to know what kind of job it was that required me registering with such a huge sum of money.

I believe they would never give me such money to register for a job. So, I felt the surest way to get the money from them was to fake my kidnap. I felt that if they realised I was in danger, they would want to do all within their means to raise the money and rescue me from danger.

Didn’t you consider that the job could be a scam and you could lose the money?

I don’t think so, because there is a lot of profit to be made from it. And more so, it was introduced to me by several people and what boosted my confidence in it was the fact that my friend is also doing it. So, I believe it is real even though I haven’t tried it.

Did you have any agreement with your friend to give them a percentage of the ransom?

No; they just wanted to help me without collecting a dime. There was no agreement on what to give them.I trust them enough. I did not have the thought that they might backtrack because all my thinking was how I would get the money and they volunteered to help me.

How much ransom did you demand?

At first, I demanded the sum of N15m but my sister said the family couldn’t afford that huge amount of money. So, she pleaded that we reduce it and it was later reduced to N8m.

Did you think it would have been be easy for your parents to raise that money?

The plan was not for my parents to raise the money. The whole plan was for my sister, who is abroad, to pay the money.And that was why I suggested that we should call my sister instead of my parents right from the start of our plans. I was hoping she would not inform my parents about it but she did, which is why I am not happy  because I believe she can afford the ransom without informing our parents.

How were you arrested?

We were exposed on the very first day we started executing our plans. When my sister was contacted and told that I had been kidnapped, she didn’t believe us. So, we had to make a video to make it look like I was truly kidnapped and was being tortured. My sister then sent the video to my elder brother in Nigeria. But there was a girl who knew about my plans; so, she went to tell my parents about it. When my family showed the girl the video, she informed them she could identify everyone in the video from their clothes even though my friends’ faces were covered. The case was reported to the police; so, they traced us to `my friend’s house where I was hiding. The plan was for me to hide there for  two weeks, but the police came and arrested me. My friends were arrested at their workplace.

How would you have felt if you got the money from your family and subscribed to then business and then later discover that it was a scam?

I would have reported to the police.

Now that your plan failed and you were arrested; do you regret your actions?

I feel bad about the whole situation and I feel pity for my parents. I know that when they heard of my kidnap they would have been worried. I regret my actions.Now that I have been arrested I feel so bad. I feel I’m not supposed to be in this kind of situation at my age.

What is  your advice to youths?

I regret my actions, so I will advise them that this kind of thing is not good and it is very bad to fake your kidnap. I have passed through this and I know it isn’t good. For me, that is my first mistake so I do not want anybody to be in this kind of situation. I know that I’ve made a mistake and I know that the government will punish me but I pray for forgiveness. I promise that when they forgive me I will never in my life involve myself in this kind of mistake again.