He said that he was not given satisfactory explanations about fuel subsidies in the past. 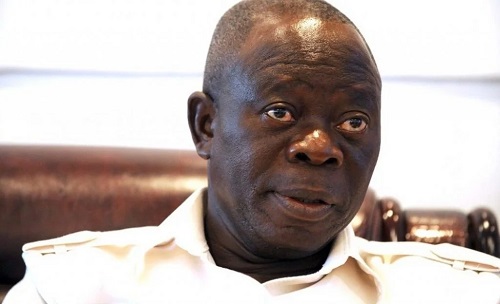 The Deputy Director of Bola Tinubu Campaign Organisation, Adams Oshiomole has revealed why he called fuel subsidy scam during former President Goodluck Jonathan's regime.
This comes after Oshiomhole and his party, the APC were accused of deceiving Nigerians.
President Muhammadu Buhari continues to pay for fuel subsidy after calling it scam prior to being elected in 2015.
The former Governor of Edo State clarified on Wednesday morning while fielding questions on the Arise Tv morning show programme.
Oshiomole was explaining his previous statement during Jonathan’s tenure alleging that fuel subsidy was a scam as against the current plan by his presidential candidate to remove fuel subsidy if elected into power in 2023.
He said that he was not given satisfactory explanations about fuel subsidies in the past.
“Let us recognise that as much as I am part of APC, and I chaired it for two years, and I am now a Deputy Director of Bola Tinubu Campaign Organisation, I have my views. I am on record, when I was the president of NLC, when Jonathan was the president, as arguing that nobody has given me satisfactory statistics to explain the numbers that NNPC threw around.
“I am not going to hide it because somebody will misinterpret it. The president does not fund the NNPC; even as NNPC is supposed to be, and it has become an autonomous private company.
“But it does not matter whether you interpret it any way you interpret it. This president admits and appreciates that part of the crisis in Nigeria is the abuse of public institutions; we are not hiding that. Nobody has suggested that we have been able to cure all those ailments.
“And the fact that you are worried, you may be seeing it as an indictment. We are not indicting, I am not indicting the government. And we are not ashamed to admit that as far as we have tried, there are a couple of things that are still not going as planned by the government.”
Top Stories