Meanwhile, Megan Thee Stallion is currently gearing up for the unveiling of her third studio album and a trip around the globe to perform for the Hotties. 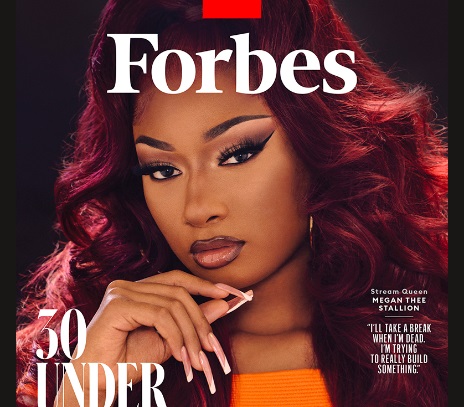 American Rapper, Megan Thee Stallion has made history on Monday.
She's now the first black woman to cover Forbes 30 Under 30.
Announcing on their official Instagram page, Forbes wrote, “Since 2019, Megan has surged ahead on hip-hop’s inside rail, leaping from $500 gigs in her hometown of Houston to partnering with music’s biggest stars—Beyoncé, Nicki Minaj, BTS and Dua Lipa.
“She is the first Black woman to cover the Forbes Under 30 issue.”
While speaking on her latest accomplishment, Megan said, “It’s really hard to be the first something in 2022!”
“I want to be bigger than just my music.”
Meanwhile, Megan Thee Stallion is currently gearing up for the unveiling of her third studio album and a trip around the globe to perform for the Hotties.
Although there is no official name for the full-length project or dates for the tour just yet.
The forthcoming project has a lot to live up to, considering her second album, Traumazine, which hit the shelves this past August, is often noted as the 27-year-old’s best work yet.
Traumazine featured controversial tracks like “NDA,” “Her,” “Pressurelicious,” and “Plan B.”
The celebrated endeavour premiered at #4 on the US Billboard 200 and is highly raved about commercially. It was released via 300 Entertainment and 1501 Certified, Megan‘s estranged label that she’s currently involved in a nasty legal battle against.
Her debut album, Good News, came in November 2020, with musical contributions from DaBaby, City Girls, Lil Durk, SZA, Popcaan, Mustard, Big Sean, 2 Chainz, Young Thug, and the honourable Beyoncé. It held a #2 spot on Billboard. 200.
Top Stories