Osun Assembly And Governor Adeleke Fight Over Change of State Name, Others


Adeleke, in his inaugural speech issued an Executive Order, reversing the name of the State from ‘State of Osun’ to Osun State. He 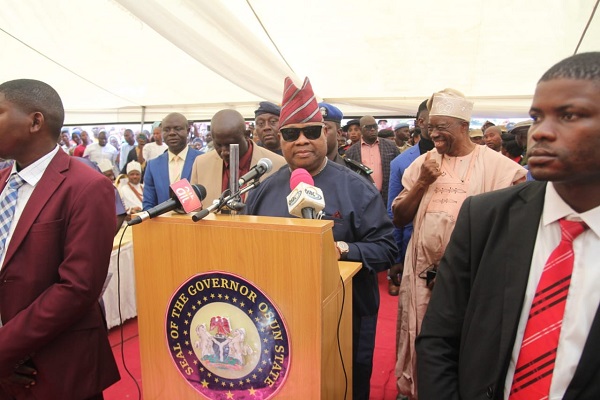 Osun Assembly has called out newly sworn-in Governor of the state, Ademola Adeleke for changing the slogan and name of the State.
Recall that Adeleke in his inaugural speech issued an Executive Order, reversing the name of the State from ‘State of Osun’ to Osun State.
He also changed the slogan of ‘State of Virtue’ to ‘State of Living Spring’.
It was also observed the new Governor has shunned the State logo, opting for the Nigeria coat of arm logo.
At the swearing in of Adeleke’s appointees on Monday, The Nation observed the State anthem was not rendered.
The pulpit of the Governor also carried an emblem that is not the State logo.
It was further gathered the State flags have been removed and replaced with those of Peoples Democratic Party (PDP) at the Government Office, Abere. The PDP flags have been hoisted at Oke-Fia park too.
But Osun Assembly cautioned Adeleke stressing that usage of the State Anthem, Crest and Flag is an enactment of law.
A statement by the Chairman, House Committee on Media and Publicity, Moshood Akande reads: “The State of Osun House of Assembly having reviewed the inaugural speech of the Governor and the activities of the inauguration hereby resolves as follows; The enactment ‘State of Osun Anthem, Crest and Flag Law, 2012’ assented to on the 18th of December, 2012 contained in Schedule I, Il, Ill, IV and V, which carefully details every component of this law is not in ambiguity.
“Schedule I is the State Anthem, Schedule II has to do with the State Crest, Schedule III is the symbolic significance of the elements in the Flag.
“Lastly, while we are aware of a court judgment in effect recognizing “Osun State”, the Assembly, pending the determination and exhaustion of all legal means would not be drawn into this matter.
“However, the State shall and will continue to be described as the State of the Virtuous (Ipinle Omoluabi).” 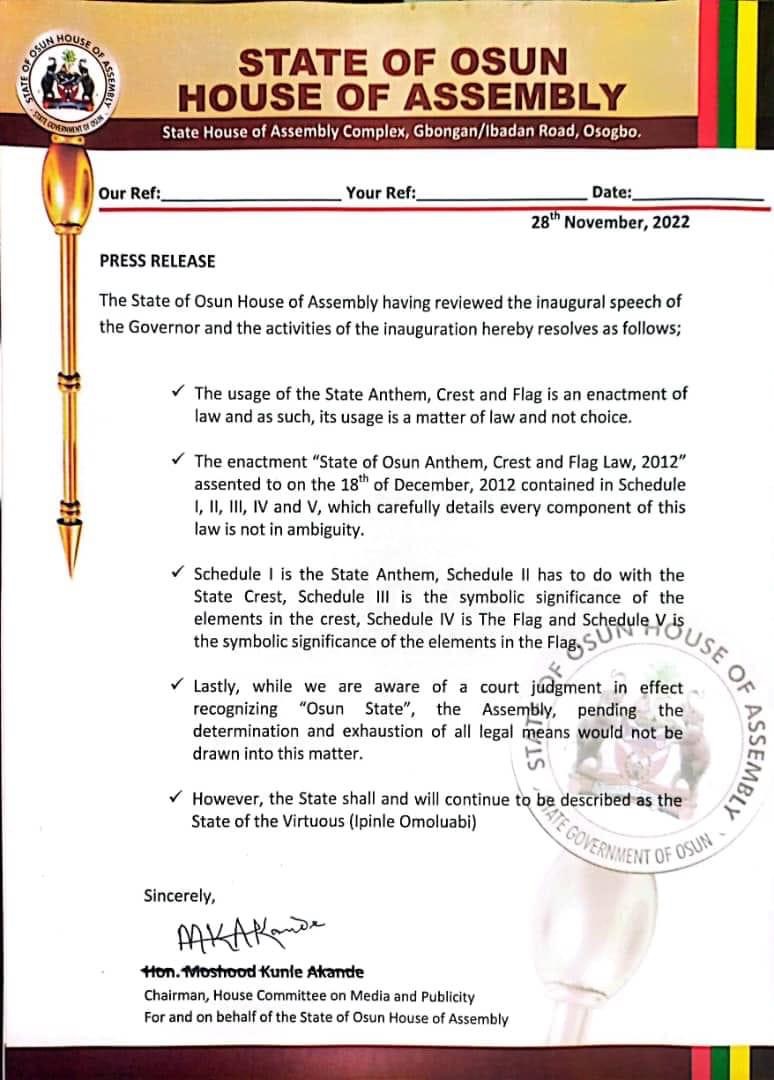