In separate publications and mediums, the All Progressives Congress (APC) asked Arise TV management to fire its reporter, Rufai Oseni. 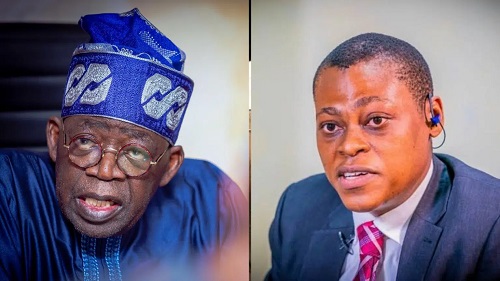 Nigerian journalist, Rufai Oseni has broken his silence after calls were made for Arise TV to sack him over his political views and commentaries.
Reacting via his Twitter on Wednesday, Oseni challenged the All Progressives Congress presidential candidate, Bola Tinubu to come for debates instead of calling for his sack.
Recall that in separate publications and mediums, the All Progressives Congress (APC) had asked Arise TV management to fire its reporter, Rufai Oseni.
In a statement credited to the APC Presidential Campaign Council spokesperson, Bayo Onanuga, the party is asking the broadcast station to sack the employee over his alleged attacks on the APC presidential candidate, Bola Ahmed Tinubu.
However, the Board of Editors of ThisDay Newspaper and Arise Television in a statement dated Monday, December 12, 2022, slammed the ruling party for such a call.
The broadcast station said it had received two separate requests from top members of the APC campaign organization to lay two news reporters off their positions.
The APC is asking for the dismissal of ThisDay Editor, Shaka Momodu and The Morning Show co-host on Arise News, Rufai Oseni, Naija News understands.
Taking to Twitter, Oseni wrote: “Some people want me sacked. Hahahahahah Joke of the year.Pls, attend debate and town hall. Rufai is not your problem oooo. Let your candidate come for debates.
“Sack ko Stephen Sackur ni. Hahahahah”
He also added that he has left such people to God, stating that all things work for his good.
“I leave them for God.
“I am a man of peace and I love all my traducers. Everything worketh together for my good,” he concluded.
Top Stories