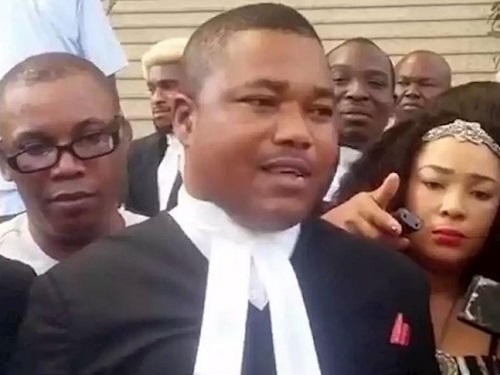 Simon Ekpa has been sued by Mr Ifeanyi Ejiofor, Counsel to the detained Leader of the Indigenous People of Biafra, IPOB, Mazi Nnamdi Kanu.
He dragged Ekpa, the self-acclaimed discipline of Kanu to court for crimes against humanity in the South Easterner part of Nigeria, according to a report by Vanguard.
Defendants in the suit include: Simon Ekpa, Anibueze Juliet, Obinna Uzoaganaobi, Chukwuemeka Livingstone, and Raphael Ajaere.
The suit marked: CU/788/2022 was filed at the High Court of the Federal Capital Territory, Abuja on December 12, 2022.
This is as an Igbo group based in Germany, has submitted a criminal complaint against Ekpa to the Prosecutor’s office of Southern Finland where the Ebonyi-born discipline of Kanu is based.
A copy of the complaint sighted by Vanguard read in part:” Submission of criminal complaint against Mr Simon Ekpa Njoku of Kauppaku 6, 15140 LAHTI, Finland with crimes against humanity, leading, participating in, supporting, funding and encouraging a terrorist organization currently engaged in numerous acts of terrorism in South Easterner Nigeria”.
It further read: ”Previously working as a blogger and YouTuber, Simon Ekpa has since many months been propagating the restoration of Biafra over the social media channels while unleashing violence and massacre against the civilian population.
”In the last several years, some Nigerians of Igbo origin which fraudulently capitalising on the emotions people attach to Biafra, have generated enormous wealth for themselves in form of donations and other income through online traffic generated on social media by promising to restore Biafra”.
The writ of summons also read in part: “You are hereby commanded that within 30 days after the service of the writ on you, inclusive of the day of such service, you do cause an appearance to be entered for you in action at the suit of Sir Ifeanyi Ejiofor, and notice that in defaulting, the claimant may proceed, and judgement may be entered in your absence”.
There has been public outcry against the five-day sit-at-home order issued by Ekpa which IPOB has since dissociated itself from, alleging that Ekpa is being used by the enemies to demonise the movement and destabilize South East.
Kanu has also since disowned Ekpa saying his approach is anti-people and anti-Biafra.
Top Stories