2023: I Feel Empty Without Wike, Others On PDP Campaign – Governor Emmanuel


The transcript of what Messrs Emmanuel and Ortom told reporters is posted on the Akwa Ibom State Government Facebook page. 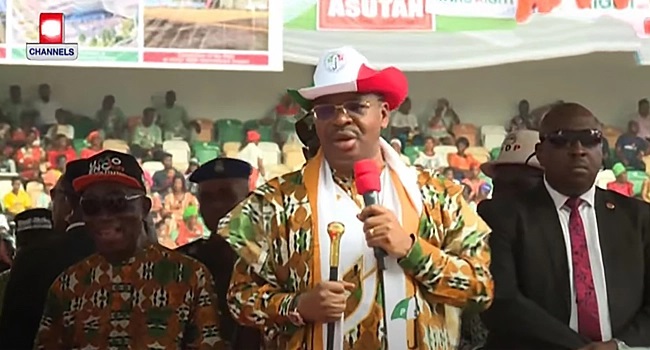 The Akwa Ibom State Governor, Udom Emmanuel has expressed disappointment that some governors of the party are not campaigning for the party's presidential candidate, Atiku Abubakar.
According to a report by PremiumTimes, Emmanuel said he feels “empty” that the five Peoples Democratic Party (PDP) governors who are members of the G5 have not been part of the party’s presidential campaign.
Mr Emmanuel is the chairperson of the PDP presidential campaign council.
“You turn around on a campaign platform, you don’t see them, (and) suddenly you will feel you need them. These are people you started together, I think I still feel empty that we are all not together on a campaign platform,” Mr Emmanuel told reporters on Thursday in Uyo after a meeting with Governor Samuel Ortom of Benue State who visited him.
The transcript of what Messrs Emmanuel and Ortom told reporters is posted on the Akwa Ibom State Government Facebook page.
Mr Ortom is a member of the G5, which is led by Governor Nyesom Wike of Rivers State.
Other governors who are members of the group are Ifeanyi Ugwuanyi (Enugu), Okezie Ikpeazu (Abia), and Seyi Makinde (Oyo).
The group, formed shortly after the PDP presidential primary in May, has so far refused to support the party presidential candidate, Atiku Abubakar.
The G5 had in November, in Abia State, said they would support a southern presidential candidate for the 2023 election, a decision they said was in line with the agreement reached in the southern governors’ forum that Nigeria’s presidency should come to the south in 2023.
Governor Wike has promised to disclose by January the candidate he would support for president.
The group has been demanding the resignation of the PDP National Chairperson, Iyorchia Ayu, to pave the way for a southerner to lead the party for the sake of achieving a “regional balance”.
Mr Emmanuel said the PDP leadership was open for peace with the G5.
“We are ready to make peace and I can assure our party that these are governors who have structures, and something to show, these are governors who have capacity.
“We will do everything possible to put the house together on the 2023 campaigns, but when it comes to governance we are still as intact as ever,” Mr Emmanuel said.
Governor Ortom told reporters that the G5 governors were still with the PDP. He, however, expressed displeasure with the leadership of the party over its management of the crisis.
“We were not happy with the national leadership of our party as it had not been able to deploy its conflict resolution mechanism internally to solve the problems, the grievances that we have.
“Governor Udom is one of us, he is a governor like the rest of us and in politics, dialogue is key towards resolving conflicts and problems that may arise as a result of conventions or congresses,” he said.
“We have never said we have turned our back on dialogue and reconciliation. If the terms are met, why not. We will work if it fits in our own interest.”
Top Stories