Father Obimma said that the LP candidate is the hope of Nigeria and the youths and the right candidate to deliver Nigeria from oblivion. 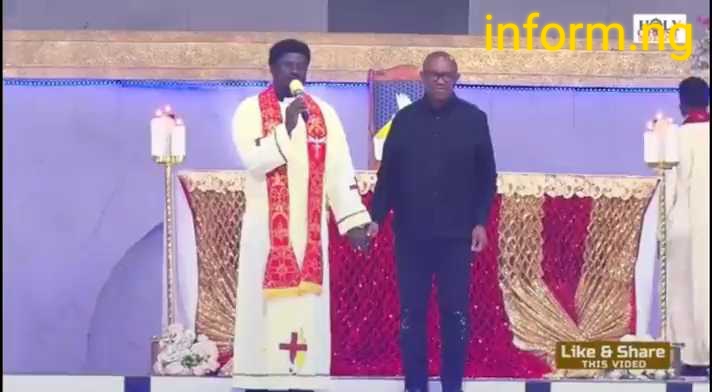 Labour Party (LP) presidential candidate in the 2023 general elections, Mr Peter Obi has gotten the endorsement of popular clergyman, Father Emmanuel Obimma aka Ebube Muonso.
The  man of God gave Obi his support at the crossover service at Holy Ghost Adoration Ministry, Uke, Anambra State on the 31st of December, 2022.
Father Obimma said that the LP candidate is the hope of Nigeria and the youths and the right candidate to deliver Nigeria from oblivion, according to InformNG.
He said that Peter Obi didn't just attend the crossover service because he was contesting for president, but has attended the adoration ministry for more than three times over the years.
Mr Obi told the congregation that his prayer is for God to hear the cries of Nigerians clamouring for a better nation.
“You know it's only prayers I'm demanding from every one of you,” Obi said.
“Let us be praying for this country in 2023, because people have suffered in it, so that God will hear our prayers [and] so that we can have a government that will use the money in the treasury to develop the country instead of stealing it.
"I wish Nigerians the very best in the new year and urge everyone to come together as one. ‘It's only by his grace [and] it's God that gives power and everything so that he will hear the prayers of Nigerians and make Nigeria a better country’,” Obi added.
"There is no need saying welcome because you are an adorer," Obimma told Obi while holding his hand.
“But I just want to encourage you — well done! Uneasy lies the head that wears the crown.
[[email protected]?“I am telling Nigerians today [that] this man here today is the hope of Nigeria; youths, this man here is your hope. This man here is the one who will deliver Nigeria from oblivion.”
The father said that the former governor of Anambra State will salvage the nation and take it to the land of promise.[/b]
“As a prophet of the most high, I present him to the world, not only Nigeria. Nigeria, if you will listen to your prophet, behold the man that will salvage this nation; behold the man that will take this country, Nigeria, to the land of promise.
“I have been saying it all the time. This time around, we are not voting for Peter because he is an Igbo man; we are not voting for him because it is his turn; we are not voting for him because he is a Christian or because he is an adorer.
“We are not voting for him because it's the turn of an Igbo man [or] because for almost fifty years was the last time an Igbo man was in the corridors of power.
“We are not voting for him because we are marginalized. We are voting for Peter based on capacity, based on competency, based on credibility, based on integrity.
“Let Nigeria hear my voice, behind the man whom God has appointed at a time like this to liberate this nation; he who has ears, let him hear.”
Father Obimma told Obi that the congregation is very excited to see him, which means 100 percent support for his presidential ambition.
He also promised the Labour Party candidate that they would give all their votes to him while telling Igbos that this was their chance to get the presidency.
“And I want to tell [the] Igbos: ‘This is the chance we have [and] now is the time’. If we miss this opportunity, forget those people that have been promising you [the] Igbo presidency in the next four years or in the next eight years.
“They have been making the promises, those promises from time immemorial and they never fulfilled it. Now is the opportunity and [the] time we have,” he added.
The father also encouraged Obi and reminded him of what he had previously said, “that God is the giver of power and all power belongs to him”.
Watch video below:
Top Stories