You Are A Liar, I Have Never Gotten Any Contract From Rivers Govt - Secondus To Wike


Responding to the allegations, the former party chairman in an interview with Sunday PUNCH, described as lies the claims by the governor. 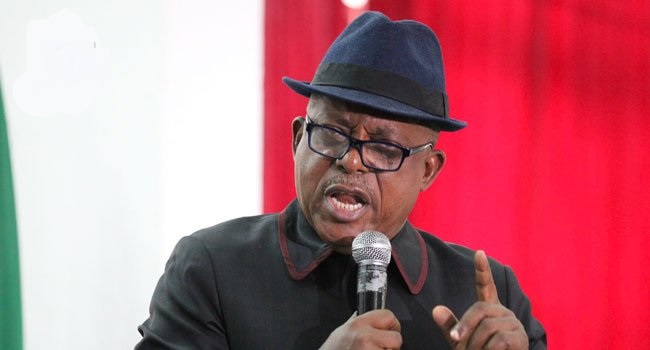 The former National Chairman of the Peoples Democratic Party (PDP), Prince Uche Secondus has called Rivers State Governor, Nyesom Wike a liar.
This comes after Wike alleged that Secondus failed to execute and complete the contracts awarded to the him by the Rivers State government.
The Governor, during the commissioning of the Eneka-Igbo Etche Road project on Friday, December 30, 2022, accused the former PDP National Chair of receiving full payment of the contract in some instances, but projects were not completed.
He also challenged Secondus to name any road contract he was awarded that he completed.
Responding to the allegations, the former party chairman in an interview with Sunday PUNCH, described as lies the claims by the governor.
What Secondus said: “I have never been a contractor. I did not collect or bid for any contract in Rivers State or from his Government as alleged by the governor of Rivers State, Nyesom Wike.
“It is wrong of him to make such weighty allegations without any evidence. Let him do his investigation and go to the Corporate Affairs Commission to get the details of the companies he has given contracts to or those that the state gave contracts. I am not one of them.
“With his status, it is wrong for him to buy airtime from television stations and be dishing out outright lies and half-truths. Is he the owner of Julius Berger, which has done so well in the state by executing contracts running into hundreds of billions of naira?”
No room for distraction: Rather than joining issue with Wike, Secondus said he would prefer to focus on working for the presidential candidate of the PDP, Atiku Abubakar, to win the February 25, 2023, presidential election.
Secondus added: “As for me, I am not a violent man and I remain committed to the victory of our presidential candidate and his running mate, Atiku Abubakar and Ifeanyi Okowa in the forthcoming presidential election. I call on Governor Wike to join hands with progressive-minded people in Nigeria to be part of a positive history. I am sure he loves the PDP and won’t do anything to jeopardise its victory at any level. I wish the Governor a happy and prosperous new year.”
Top Stories