Six Persons Stabbed At A Train Station In Paris


The police who intervened were off-duty officers in plain clothes who used their service weapons to stop the attack. 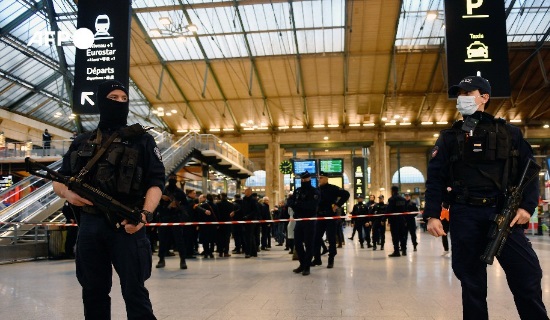 At least six persons have been left injured after being stabbed by an attacker at a train station in Paris, France.
AFP reported that the incident happened on Wednesday at the busy Gare du Nord station in Paris.
The suspect was later shot and apprehended by police, authorities said.
The Gare du Nord is a busy commuter hub that also serves as a departure point for trains to northern France, London, and northern Europe.
Police were treating the stabbings as attempted murder, not as a terrorist attack, a source close to the case said.
The attacker’s motive was not immediately clear.
One of the six people was seriously wounded in the attack at 6:42 am (0542 GMT), while the other five sustained light injuries, prosecutors said.
The entire incident was over within two minutes, Interior Minister Gerald Darmanin told reporters at the scene.
It was not immediately clear what type of weapon the attacker had used.
Police initially described it as a bladed weapon. Darmanin later said it was not actually a knife, but a “threatening weapon”.
Le Parisien newspaper said it was believed to be a sharp pointed tool, “a kind of awl”.
The attacker sustained injuries to the chest after police fired three rounds. He was taken to hospital where he was fighting for his life, Darmanin said.
The police who intervened were off-duty officers in plain clothes who used their service weapons to stop the attack, he said.
The police officers “were returning from duty at police headquarters to take their train and go home, but they were armed”, Darmanin said.
They were authorised to make use of their weapons although not on duty, he said.
One member of the border police deployed at the station was lightly injured.
“An individual injured several people this morning at the Gare du Nord,” Darmanin had tweeted earlier.
“He was quickly neutralised. Thank you to the police for their effective and courageous response”.
The incident caused delays to trains at the station in the early morning rush as police cordoned off the station, and set up large white curtains around the attack scene.
But no services were cancelled, a spokesman for rail operator SNCF told AFP.
The Gare du Nord is one of the world’s busiest train stations with 700,000 travellers per day.
It is the departure point for  Eurostar and Thalys services to the UK, Belgium, the Netherlands and Germany.
France remains on a state of heightened security alert after a spate of deadly attacks by Islamist radicals, and others, since 2015.
Top Stories