APC Disgraced As Community Rejects Transformer From Them, Says It Is Fake (Video)


In the video, the locals insisted that they are not interested in the transformer brought to them by the state’s governor, Dapo Abiodun. 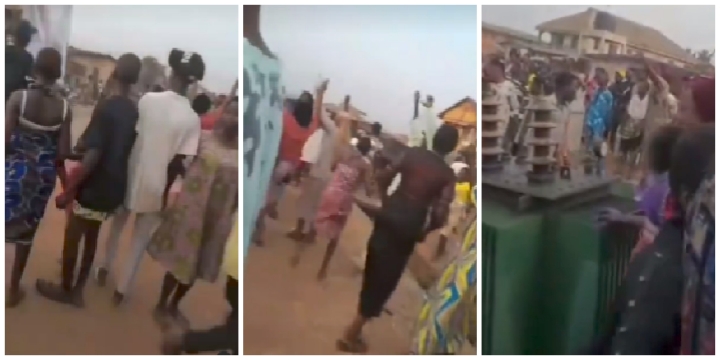 Some residents of a community in Ogun state have disgraced the All Progressives Congress (APC) by rejecting a transformer donated by the party days to the presidential election.
A trending video showed the moment locals showed their anger after the  transformer was brought to them by the state governor, Dapo Abiodun.
Speaking in Yoruba, some individuals in the crowd claimed the transformer is fake and the one given to them earlier by the governorship candidate of the Peoples Democratic Party (PDP), Oladipupo Adebutu is the authentic one.
The crowd proceeded to chant PDP whilst also lifting a banner of the party.
Watch the video below:

See reactions:
oluwole, “Why must it be during election before they know things the community needsamoo_fola_voice, Juju don expire . Una think say you wise. election is here . Una go get sense by force.”
okwima, “Is Party supposed to be providing transformer ? What happened to Phcn”
lady_vittoria1, “Even if they collect the transformer, they will still have electricity once in a week. The rickety electricity supply in Ogun state is so bad. Human beings live in Ogun state not animals, Ogun state government.”
opprekid, “we are becoming something else in this country.. and we are joking with bomb powder. In ogun state, ijebu and egba can never complain about the present government becos they have it all… is not by party… u reject transformer ? Please who is going to suffer it… what if they now win the election? That particular community will enter blacklist right ? It is selfishness that will make anyone reject something that is for the mass becos of one nonsense supporter…. we have alot to work on.”
okrote4real, “It’s not bad if you have two transformers. Don’t reject anything from politicians, they are yours.”
____lamifundz, “I believe this country is in the hands of Angel portable.”
omobee_ayadee, “Awon temi My own people.”
bsm_023, “Abeg next time collect am and still do wetin dey your mind it’s our money our right.”
Top Stories