The CBN leadership made this known on Friday during a sensitisation programme organised for Osun market women at Ayegbaju market to acquaint them with the new Naira notes of N200, N500 and N1000. 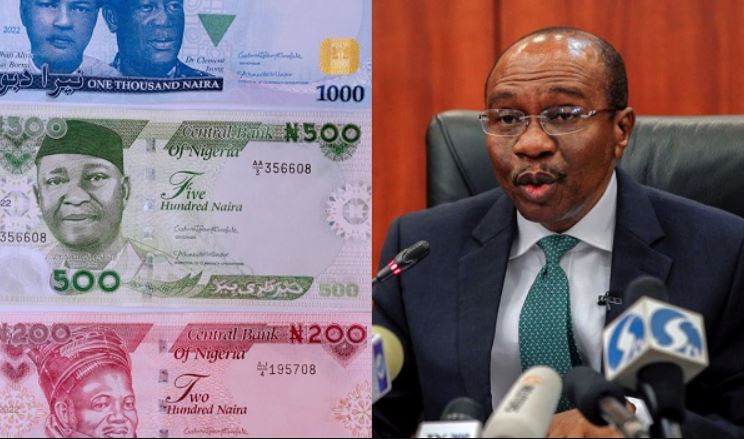 The Central Bank of Nigeria (CBN) is set to start punishing commercial banks.

The CBN has commenced punitive measures on commercial banks by fining them N1million per day for each box of new naira notes they refused to pick and disbursed to their customers ahead of the 31st of January 2023 deadline.

The CBN leadership made this known on Friday during a sensitisation programme organised for Osun market women at Ayegbaju market to acquaint them with the new Naira notes of N200, N500 and N1000.

Speaking at the event, the Deputy Director, Research, CBN, Adeleke Adelokun disclosed that CBN had printed enough new naira notes, however, banks refused to pick them up.

“We also mandated the banks to put new naira notes in the ATM machines  all over Nigeria so that Nigerians will have access to the new Naira Notes.”

Meanwhile, the Branch Controller of CBN, Osogbo branch, Madojemu Daphne who was represented by Adebayo Omosolape disclosed that Nigerians hoarded the old naira notes to the tune of N2.7 trillion.

The Central Bank of Nigeria (CBN) has insisted that the old naira notes of N200, N500 and N1,000 will cease to be legal tender after January 31.

“The old naira notes will cease to be legal tender by January 31, 2023. Pay in your old banknotes to beat the rush,” he said.

The branch controller spoke during the apex bank’s sensitisation tour of the new naira notes in Kano metropolitan markets.

Ibrahim disclosed that the new naira notes have been produced enough for distribution to all the commercial banks in the country.

He threatened to slam sanctions on commercial banks hoarding the newly designed banknotes.

Reacting to complaints that the Automated Teller Machines (ATMs) were still dispensing the old naira notes, the CBN branch controller said the CBN has sent its staff to inspect bank’s ATMs to ascertain those still dispensing old notes for query.

He said the traders have the right to report any bank found either hoarding the new naira notes or charging customers before allowing them to deposit their old naira notes.

“You have the right to report any bank found hoarding the new naira notes or refuse to collect your old naira notes before the 31st January 2023 deadline.

“No bank should refuse to collect the old naira notes until the deadline of 31st January, 2023,” he said.

He told the audience that CBN has directed commercial banks to desist from payment of new naira notes on the counter, except through ATMs, as part of efforts to check favouritism of customers regarding the new currency.

“CBN agents are going round to ensure banks comply with the directive of dispensing the new notes via ATM,” he assured.

He explained that there is no limit to the amount of old N200, N500 and N1,000 banknotes one can deposit in their account.

He said the sensitisation was designed to enlighten the traders on the need to deposit the old notes before the deadline to avoid any loss.

He said the redesign of the naira notes was aimed at checking corruption and addressing inflation as well as boosting the nation’s economy.

The Nigerian Economic Summit Group has identified two factors that contributed to the devaluation of the naira in 2022.

The first was inflation which the NESG said weakened the naira by 14.9 percent and the second was the naira redesign policy of the Central Bank of Nigeria which “triggered the devaluation of the country’s currency”.

This information is contained in the 2023 Macroeconomic Outlook Report of the NESG titled ‘Nigeria in Transition: Recipes for Shared Prosperity.’

The report lamented that the purchasing power of N1,000 in January 2022 tumbled to N851 by the end of the year, worsening “the various forms of poverty – monetary and non-monetary deprivation – and contributed to Nigeria’s multi-dimensional poverty”.

Giving a breakdown, the report said “inflation numbers showed that the Food and Core inflation averaged 20.6 per cent and 15.8 per cent, respectively, in 2022. Since the country relied heavily on imports for manufactured and industrial intermediate goods, global inflationary pressure permeated all productive activities in Nigeria.

NESG added that “a combination of cost-push and demand-pull factors constituted significant drivers of the surge in the general price level.

“Since the demand for necessities is relatively inelastic – the change in demand is relatively unresponsive to the change in price – many businesses transferred additional production costs to consumers, resulting in higher overall prices for goods and services, particularly food.”

The NESG also said that naira depreciated by 2.4 per cent and 30.01 per cent in the Investors and Exporters and parallel market rates respectively.

Consequently, the premium (the gap) between the official and the parallel markets expanded from N55 (18 percent of the official rate) at the beginning of the year to N294 (65 per cent) at the end of 2022.”

The NESG added that the naira depreciated, especially at the parallel market, due to the move by the CBN to redesign the country’s currency.

According to the report, “in December 2022, the Monetary Authority initiated the redesign of the N200, N500, and N1,000 notes to manage Naira liquidity. This action triggered further depreciation of the Naira against the US dollar in the foreign exchange rate market, especially the parallel market rate.

“Aside from the CBN currency redesign, other issues that triggered naira depreciation include US monetary policy tightening that strengthened the US dollar and the proliferation of political activities with the US dollar.”

The report predicted that inflation will likely average to 20.5 per cent in 2023 and the unemployment rate will increase by 37 percent with a poverty headcount at 45 per cent this year.