He claimed that Primus Odili, the former Chief of Staff to former Governor Willie Obiano, was also present when Obidigwe and his thugs attacked him. 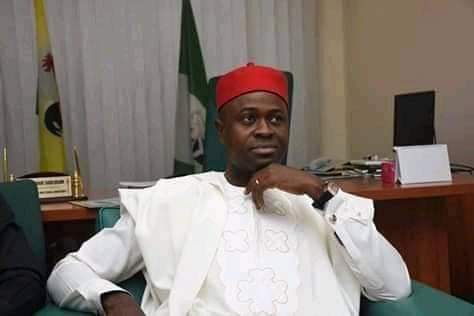 Chinedu Anaukwu, a communications expert and trade partner attached to one of the mobile telephony companies, has slammed a Nigerian lawmaker with an accusation.

He accused Chinedu Obidigwe, a member representing Anambra East/West Federal Constituency in the National Assembly, of attacking and beating him to a coma, with the help of “hired” thugs.

Anaukwu, who spoke to journalists on his sick bed at Life International Hospital, Awka, Anambra State, on Monday, said the incident happened inside the residence of a Catholic priest, Rev. Fr. John Manafa, at Aguleri community in Anambra East Local Government Area, on Saturday.

He claimed that Primus Odili, the former Chief of Staff to former Governor Willie Obiano, was also present when Obidigwe and his thugs attacked him.

Meanwhile, Aguleri is the hometown of Obiano.

Anaukwu and Obidigwe are also from the same Aguleri community and belong to the Aguleri WhatsApp platform, where they engage each other in critical comments.

Anaukwu said the beating caused him serious body and facial injuries, as he was rushed to the hospital, where he is critically ill.

He added that his various critical comments about Obidigwe on his social media handles led to the attack on his life by the senator.

He said, “In my social media criticisms of the senator, I had told Obidigwe to stop fighting Obiano’s wife for no reason because he benefitted immensely from Obiano’s government.

“I had gone to supply a communication gadget to Primus Odili, former Chief of Staff to Obiano, when Odili asked me to accompany him to a meeting at Rev. Fr. John Manafa’s house at Aguleri which I Obliged him.

“As soon as Odili and I reached Fr. Manafa’s place, Obidigwe sighted me and ordered his thugs to tie my two hands and he started punching me heavily on my face and in the process smashed my eyeglasses.

“As he was punching me, he asked me why I chose to be criticising him on social media and the Aguleri platform.

“At a point, Obidigwe started pushing and heating me left and right before Odili and Fr. Manafa separated him from me. As I left the compound to go, Obidigwe told his thugs to lock the gate and deal ruthlessly with me and one of the thugs hit me on the back of my neck and I stumbled and fell down.

“As I laid flat on the floor, as a result of the club they hit me, the other thugs pounced on me and hit me constantly at my chest and face and as I was wearing eyeglasses, they smashed the glasses into my eyes until Fr. Manafa and Odili came again and separated them from me.

“As soon as I stood up, and at that point, I noticed I could not open my two eyes well. The pains held me back until I barely managed to find myself here in the hospital, and got admitted.

Anaukwu stated that he would report the matter to the police as soon as he regained consciousness and then other steps would follow suit as he would not allow what he described as rascality to be swept under the carpet.

Efforts to get in touch with Odili, Obidigwe and Fr. Manafa proved abortive as they did not take their calls for reactions.

However, Fr. Manafa, who later took his call, said he would not like to comment on the incident.

The Civil Liberties Organisation, South-East Zone, in a telephone chat, condemned the incident and described the action of the thugs and their principal who incidentally is an honourable member of the parliament as barbaric and uncalled for.