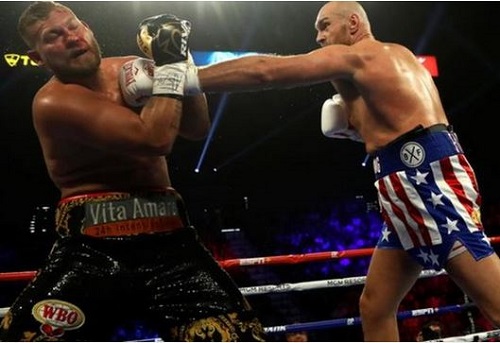 Fury, determined to put on a show on his Las Vegas debut, overwhelmed Schwarz with a dazzling display of ringcraft before unloading in the second round at the MGM Grand Garden Arena.

The flamboyant 30-year-old had established his dominance early, rocking Schwarz repeatedly with a series of stiff left jabs in the first round that reddened the German fighter’s face.

In the second round Fury bamboozled Schwarz by switching to southpaw, once again repeatedly catching his less experienced opponent.

Fury had Schwarz on the canvas after uncorking a crisp right-left combination, blood pouring from the German fighter’s nose.

He then cornered Schwarz and unfurled a series of unopposed punches that left referee Kenny Bayless no option but to wave an end to the fight.

“The key tonight was to enjoy myself,” Fury said afterwards. “I used the jab, I was slipping and sliding.”

“I came here to have fun and put on a show for Las Vegas and I hope everyone enjoyed it as much as I did,” added Fury, who had entered the ring wearing a Stars and Stripes-themed costume to the strains of James Brown’s “Living in America.”

The win saw Fury improve to 28-0-1 with 20 knockouts and will heighten demand for a rematch against undefeated WBC heavyweight champion Deontay Wilder.

Fury and Wilder fought an epic battle in their first meeting in Los Angeles last December, when Fury famously got up from a 12th round knockdown to earn a draw.

Fury said after his win on Saturday that his camp is planning one more fight, either in late September or early October, before a rematch with Wilder early in 2020.

“What’s next? Next year we’re going to hunt down Deontay Wilder for that green belt,” Fury said.
Top Stories