Higuain spent the second half of 2018/2019 at Stamford Bridge scoring only five goals in 14 Premier League appearances. 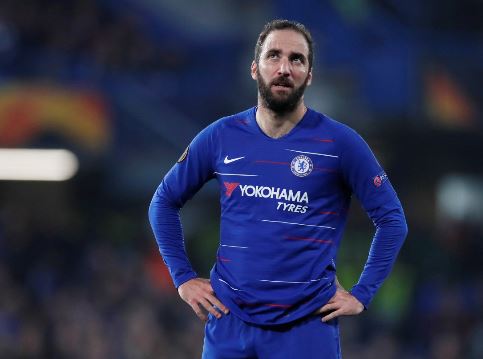 Gonzalo Higuain
Chelsea have confirmed that Gonzalo Higuain has left the club, with the Europa League winners choosing not to extend his loan from Juventus or make it a permanent deal.
Higuain spent the second half of 2018/2019 at Stamford Bridge scoring only five goals in 14 Premier League appearances.
Chelsea had the option to pay €18million to extend the 31-year-old’s loan for another 12 months, while the Blues could have also purchased the forward from Juve for €36m.
But the Blues, in a statement on the club’s official website, said: “Gonzalo Higuain joined Chelsea on loan from Juventus in January. He was reunited with Maurizio Sarri after their successful time together at Napoli.
“Higuain made his Blues bow in an FA Cup win over Sheffield Wednesday, and opened his account with two superbly-taken goals the following weekend against struggling Huddersfield.
“He netted three more times before the expiry of his loan, all sharp finishes that highlighted his natural ability in front of goal. Fulham, Burnley and Watford were his victims, and he more than played his part in our eventual third-placed Premier League finish.
“With Olivier Giroud leading the line in the Europa League, Higuain’s involvement was largely limited to domestic competitions, but he leaves having added another winners’ medal to his extensive collection after victory in Baku.”
Top Stories