Explained: How Lightning Strikes, And Why It Kills People


Explanations have been given to how lightning strikes the earth and why it kills people who get hit. 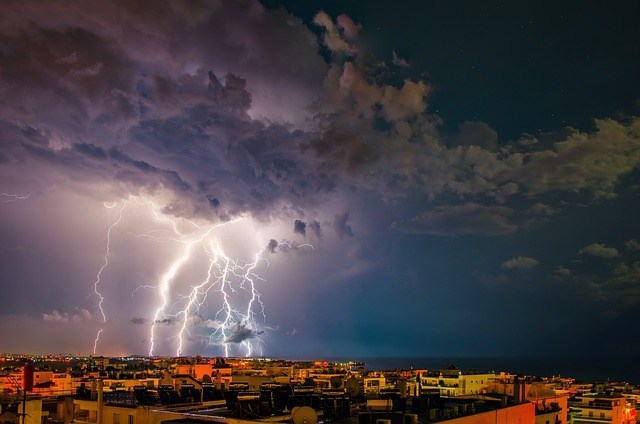 Lightning is a very rapid — and massive — discharge of electricity in the atmosphere, some of which is directed towards the Earth’s surface. These discharges are generated in giant moisture-bearing clouds that are 10-12 km tall. The base of these clouds typically lies within 1-2 km of the Earth’s surface, while their top is 12-13 km away. Temperatures towards the top of these clouds are in the range of minus 35 to minus 45 degrees Celsius.

As water vapour moves upward in the cloud, the falling temperature causes it to condense. Heat is generated in the process, which pushes the molecules of water further up.

As they move to temperatures below zero degrees celsius, the water droplets change into small ice crystals. They continue to move up, gathering mass — until they are so heavy that they start to fall to Earth.

This leads to a system in which, simultaneously, smaller ice crystals are moving up and bigger crystals are coming down.

Collisions follow, and trigger the release of electrons — a process that is very similar to the generation of sparks of electricity. As the moving free electrons cause more collisions and more electrons, a chain reaction ensues.

This process results in a situation in which the top layer of the cloud gets positively charged, while the middle layer is negatively charged. The electrical potential difference between the two layers is huge — of the order of a billion to 10 billion volts. In very little time, a massive current, of the order of 100,000 to a million amperes, starts to flow between the layers.

An enormous amount of heat is produced, and this leads to the heating of the air column between the two layers of the cloud. This heat gives the air column a reddish appearance during lightning. As the heated air column expands, it produces shock waves that result in thunder.

How does this current reach the Earth from the cloud?

While the Earth is a good conductor of electricity, it is electrically neutral. However, in comparison to the middle layer of the cloud, it becomes positively charged. As a result, about 15%-20% of the current gets directed towards the Earth as well. It is this flow of current that results in damage to life and property on Earth.

Lightning rarely hits people directly — but such strikes are almost always fatal.People are most commonly struck by what are called “ground currents”. The electrical energy, after hitting a large object (such as a tree) on Earth, spreads laterally on the ground for some distance, and people in this area receive electrical shocks.

There is a greater probability of lightning striking tall objects such as trees, towers or buildings. Once it is about 80-100 m from the surface, lightning tends to change course towards these taller objects. This happens because air is a poor conductor of electricity, and electrons that are travelling through air seek both a better conductor and the shortest route to the relatively positively charged Earth’s surface.

What precautions should be taken against lightning?

People are most commonly struck by what are called “ground currents”. The electrical energy, after hitting a large object (such as a tree) on Earth, spreads laterally on the ground for some distance, and people in this area receive electrical shocks.

It becomes more dangerous if the ground is wet (which it frequently is because of the accompanying rain), or if there is metal or other conducting material on it. Water is a conductor, and many people are struck by lightning while standing in flooded paddy fields.

The Met office routinely issues warnings for thunderstorms. But this is a very generic advisory, and for locations that are very large in area.

Predicting a thunderstorm over a pinpointed location is not possible. Nor is it possible to predict the exact time of a likely lightning strike.

For reasons given above, taking shelter under a tree is dangerous. Lying flat on the ground too, can increase risks. People should move indoors in a storm; however, even indoors, they should avoid touching electrical fittings, wires, metal, and water.
***
*This perspective on lightning was first published by Indian Express
Top Stories