So Sad! Husband And Wife Shot Dead While Protecting Their Baby From Gunfire In US (Photo)


A young couple have lost their lives in a painful manner after being killed in the El Paso shopping complex massacre. 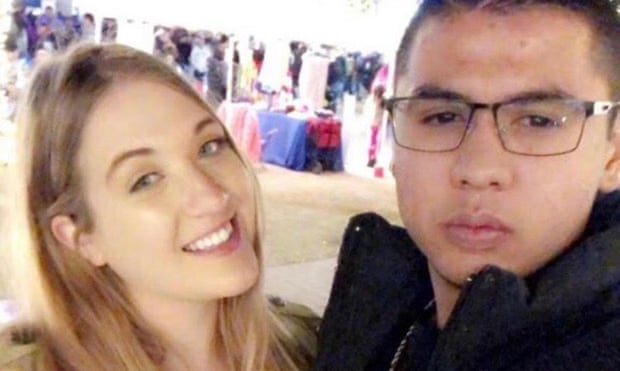 The husband and wife died while protecting their two-month-old son
Jordan and Andre Anchondo were shot while trying to protect their two-month-old son, when a gunman opened fire in a crowded El Paso shopping area, according to a report by the UK Guardian.
The baby was injured, and almost certainly had his life saved by his parents’ heroic efforts.
“Her husband was in front of the gunman to protect Jordan, and Jordan was protecting her baby,” Monique Terry, Jordan Anchondo’s 21-year-old cousin, told the Guardian. “That explains who she was as a person – she gave everything for her baby”, Terry said about her cousin.
Jordan and Andre Anchonda were among the 22 people killed in Saturday’s rampage.
Federal prosecutors are treating the shooting at the Texas city on the Mexican border as an act of domestic terrorism and a possible hate crime. The 21-year-old gunman was taken into custody on Saturday.
Leta Jamrowski learned on Saturday afternoon that her sister, Jordan, had been fatally shot by the gunman at the Texas border city, while Jordan and her baby were shopping for back-to-school supplies earlier in the day.
“From the baby’s injuries, they said that more than likely my sister was trying to shield him,” Jamrowski told the Associated Press. “So when she got shot she was holding him and she fell on him, so that’s why he broke some of his bones. So he pretty much lived because she gave her life.”
Terry told the Guardian that the family eventually learned later on Sunday that Andre didn’t survive either, and that he had died at Walmart, and was still inside the store.
Jordan and Andre were the parents of three children, who are five years old, two years old and two months old.
The couple had dropped off their five-year-old daughter at cheerleading camp nearby just before going to Walmart to buy school supplies, Terry said.
“It’s very tough. She was the light of our family,” Terry continued. “She brightened up the room. Her laugh was contagious. She always put you in a better mood … She always saw the good in people.”
The husband and wife had just celebrated their first anniversary days earlier. “They glued each other together. They were a perfect fit,” Terry said.
The two-month-old, who was at the Walmart, suffered two fractured fingers during the attack, but was recovering well, she added.
The children don’t yet understand what happened, she said. “Their oldest keeps asking for her mom and dad.”
Elizabeth Terry, Jordan’s aunt, said it was clear the parents gave their lives for their child. “He’s alive because of the heroics of both his mother and father,”
she said, adding, “They are clearly amazing parents – self-sacrificing in every sense of the word … It’s a huge loss to the family and a huge loss to the world.”
The family is working hard to support the children with “a lot of hugs, a lot of kisses, a lot of holding them tight”, Elizabeth Terry said. She said it was also inspiring to see how grieving families and community members were all supporting each other: “The stories are endless of how the community has come together.”
Local prosecutors have said they intend to seek the death penalty for the suspect in the shooting.
The victims in the Texas shooting have yet to be named by the authorities.
Top Stories