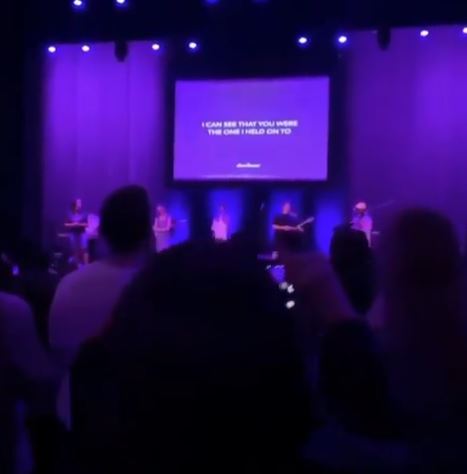 The church service
In recent years, pop megastar Justin Bieber has become increasingly open about his Christian faith. Indeed, on Wednesday night, he took perhaps his boldest step so far — by leading a congregation in worship.

Bieber was spotted singing out his praises to God at Churchome, Beverly Hills — part of a network of congregations launched by Seattle megachurch leader and Bieber’s personal pastor, Judah Smith.
“I never would have made it without you,” the singer roared during the set. “Now I see that you were there for me!”

In a video obtained by TMZ, Smith could be seen taking to the stage to commend Bieber in his gift of leading worship.

“We first met when Justin was, like, eight or something in Toronto and he’s always been a worshiper and it’s a lot of who he is,” Smith explained. “I want to be part of a church where everybody gets a fair shake in using their gift to contribute to the community. Far be it from me to stand in the way of someone who clearly has a gift to lead worship.”

At that point, Justin himself starting talking to the congregation, insisting that his appearance on stage was not “a show.”

“I want to second that too, I’ve kind of not done this because I felt like — I didn’t want to make it seem like — I don’t know. Judah, you know what I’m trying to say. I just didn’t want people to think, like, this was a show,” the singer humbly explained.

In an Instagram post featuring footage of the star’s debut worship leading appearance, Bieber wrote that God was seeing him through a difficult season of life at the moment.

“Sang at church last night. God is pulling me through a hard season. Having trust in Jesus at your worst times is the absolute hardest. But he is faithful to complete what he started,” the singer declared.

Sang at church last night. God is pulling me through a hard season. Having trust in Jesus at your worst times is the absolute hardest. But he is faithful to complete what he started. I also want to thank my wife for being such a huge support in my life through this season.. it says in the bible count it ALL JOY when you face trials of various kinds. Sounds insane considering when u face trials u feel terrible. But if we are grateful and worship god for what we do have in that season there is so much power in that... whatever pain you are going through just keep telling yourself THIS WONT LAST! Love you guys we in this together