Barcelona Expected To Target Neymar Instead Of Osimhen


The in-form Nigerian forward has been rumoured to interest the Camp Nou outfit and Goal takes a look if such a transfer could be possible. 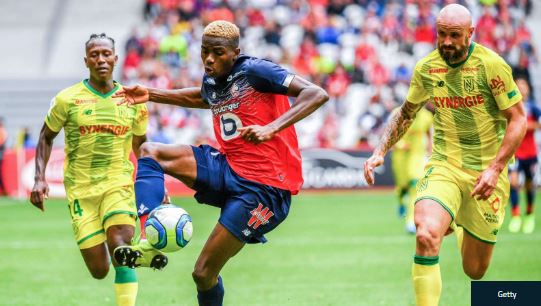 Several reports are linking the Nigeria international as a potential replacement for Luis Suarez, who will be leaving at the end of the season.

The Uruguayan has a year left to run on his contract but it will not be renewed.

Even though Osimhen is on form at Lille, where he has had a hand in 10 goals (eight goals, two assists) in 11 appearances, there are no guarantees the 20-year old can provide the kind of consistency of Suarez at Camp Nou, scoring 183 goals, and providing 96 assists.

Goal's correspondent in Barcelona has learnt their concern over Osimhen is compared to Luka Jovic who enjoyed a breakout season at Eintracht Frankfurt last term, scoring an impressive 27 goals, including 10 en route to the Europa League semi-finals. However Jovic has failed to replicate his form at present club Real Madrid, where he is yet to score and has been named in the starting XI just twice.

Goal understands the Blaugrana will rather attempt to pursue a familiar face in Neymar again, after a return from Paris Saint-Germain failed to materialise this summer.

The Brazilian hotshot donned the blue and red jersey between 2013 and 2017, scoring 105 competitive goals in 186 appearances.
Top Stories