Man Falls On Train Tracks While Looking At His Phone (Video)


A man has been spotted falling directly onto train tracks while being distracted by his phone. 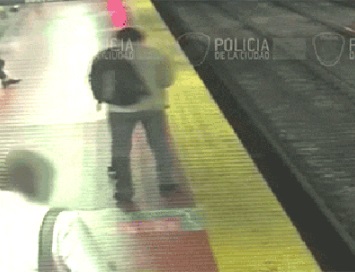 The man fell onto a train track
A man has been left dazed after he fell onto train tracks in Buenos Aires while being distracted by his phone.
The unnamed Argentinian man, 49, didn’t notice he was nearing the edge of the train platform because he was engrossed in his phone on November 13. He fell directly onto the tracks.
Fortunately for him, passers by came to his rescue and pulled him back onto the platform, where he was given help by emergency services.
It happened on the Aguero stop of the D line in Buenos Aires. He was wearing an orthopedic brace when he fell onto the rail tracks. The man refused to be taken to the hospital for medical evaluation.
The police released the video to warn mobile phone users to be more careful.
Watch the video below:
Top Stories