A Nigerian lawmaker has promised to make the identity of the five most notorious SARS officers public. 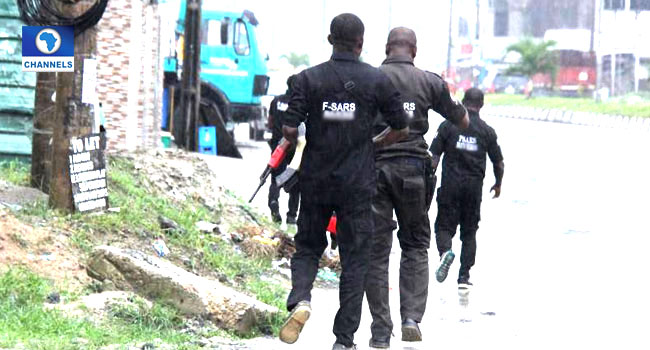 SARS
A list of five most notorious officers of the defunct Special Anti-robbery Squad of the Nigeria police will be made public by the Minority Leader of the Senate, Senator Enyinnaya Abaribe.
The federal lawmaker promised to make the names public on Tuesday in his contribution to a motion on the #EndSARS protests and the need for comprehensive police reforms in the country.
Senator Abaribe, who commended his colleague from Ekiti State, Senator Biodun Olujimi – the sponsor of the motion, also asked President Muhammadu Buhari to address Nigerians on the issue.
He said, “I support this motion. I think part of what is going to resolve this issue is for the President of the Federal Republic of Nigeria to look at the issue and address the nation on them.
“I will also forward to you (the Senate) the names of the five most notorious SARS Officers who have been fingered in killing so many Nigerians.”
Should the President address the nation, the lawmaker believes the #EndSARS protesters will listen knowing that he has come out directly to deal with the issues raised.
He, however, stated that giving a speech would not totally calm the tension in parts of the country but for the President to put his words into action.
“I suggest also that in doing that, he (Buhari) must try a way of setting up a judicial panel that will have people that are well respected by the same youth so that they can address a certain issue and that issue is those notorious SARS officers that have been identified and even identified by the Presidential Panel,” Senator Abaribe suggested.
Following various contributions to the motion raised by Senator Olujimi, the Senate asked President Buhari to address the nation as soon as possible on the issues raised by the #EndSARS protesters.
The lawmakers also appealed to all Nigerians to resort to the use of legal institutions to resolve disputes and conflicts, adding that all tiers of government should put in place and sustain policies of social-economic reforms that would raise the standard of lives of the people.
They called on police authorities to operate strictly in accordance with the rules of engagement appropriate in a democratic environment and ensure a holistic comprehensive reform of the police.
The senators sought an increase in the overall welfare of police personnel, including training and medical insurance of all members of the Force.
But they asked the #EndSARS protesters to kindly, in the interest of everyone, stop their actions and embrace genuine dialogue.
Top Stories