Policeman Who Ordered Me To Lie Down At Gunpoint Can’t Do That To Hausa, Yoruba Rulers - Igbo Monarch Cries


A monarch in Imo state has narrated how the sacred stool of his community was desecrated by a policeman. 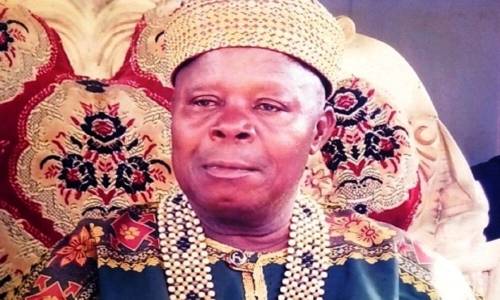 Eze Boniface Okereke
A traditioinal ruler in Imo state has cried out for justice after being humiliated by a police officer.
The Igwe Uzoubi Umuna Orlu, Imo State, Eze Boniface Okereke while recounting an ugly encounter with a policeman during the recent clash between members of the Eastern Security Network and personnel of the Nigerian Army in his domain, said a policeman from the North assaulted him.
The monarch lamented that the policeman asked him to lie on the ground “for over eight minutes” despite being a monarch, an action which he said desecrated the traditions and culture of the land.
In an Interview with PUNCH, Okereke said the crisis, about three weeks ago, was strange to the community as his domain had been largely peaceful, while noting that the “clash was regrettable because people died, properties were lost and business activities were halted.”
He said, “Orlu has no history of violence. Apart from the #EndSARS protest in 2020, this was the first time they clashed. The Indigenous People Of Biafra members don’t live with us here. They came, struck and left. And that is why every traditional ruler was enjoined to find out if any youth in Orlu is among the people who are causing these pains.
“The greatest humiliation of my life was when a policeman desecrated the culture of Igbo people by ordering a traditional ruler of my class and status to lie down on the road before my subjects. I suffered an embarrassing humiliation in the hands of mobile policemen at Carrot Junction here in the domain on Wednesday, January 27.
“At about 2pm, while I was returning from a meeting of the Orlu Traditional Rulers Council held at Umudioka ancient kingdom, on reaching the junction, a team of mobile policemen stopped me and one of them ordered me to get out of my car. I quickly hearkened to his order.
“Despite the inscription on my vehicle number plate asserting to my status as His Royal Highness, Eze B.C. Okereke, the traditional ruler of Uzoubi Umuna autonomous community and my physical appearance as an old man and verbal expression to him that I am the traditional ruler of this community, he still pointed his gun at me and ordered me to lie flat on the ground. I quickly obeyed him because he pointed his gun at me and I didn’t want him to shoot him.
“I lay flat on the floor for over eight minutes and it was thereafter that one of the policemen who later saw the inscription on my car and my regalia quickly urged me to stand and reprimanded the other overzealous cop. This humiliation, desecration of our cultural institution happened in the full glare of my subjects and passersby. It was an embarrassing situation, a big disgrace to my throne and disrespect to my person, community and the council of traditional rulers.”
“I have petitioned the Commissioner of Police in charge of the Imo State Police Command, informing him of the humiliation and urging him to investigate it. That was a humiliation that should not be swept under the carpet. This insult on a traditional ruler of my class cannot happen in Yorubaland or Hausaland. This must be corrected.”
Top Stories