Man Kills Girlfriend After She Caught Him With Another Girl (Photo)


The slain KDF soldier identified as Esuron Phoebe Kaele was based at Modica Garisson. 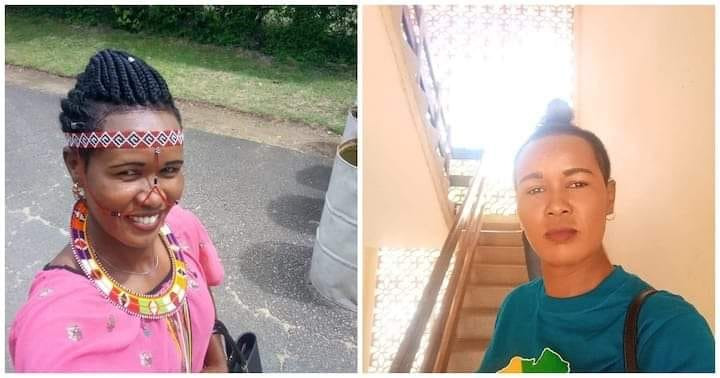 A man has killed his girlfriend during a quarrel over another woman.
The Kenya Defence Forces (KDF) officer has now been arrested.
He allegedly killed his soldier girlfriend in Utawala area, Nairobi in a suspected love triangle.
The slain KDF soldier identified as Esuron Phoebe Kaele was based at Modica Garisson, Garissa while his boyfriend identified as John Gitau lived in a rented apartment outside Embakasi Garisson in Nairobi.
Preliminary investigations indicate that Phoebe had arrived home on Sunday, March 6, unannounced and found Gitau with another woman which prompted a quarrel.
The said woman was hiding when Phoebe arrived but her shoes were at the door.
Phoebe demanded to know the owner of the shoes and this degenerated to fighting.
It was then that Gitau picked up a kitchen knife and stabbed his girlfriend in the neck killing her.
He and his mistress then tried to clean the pool of blood that had oozed from the deceased and hid the blood soaked clothes in a bathroom.
And after the incident, Gitau called one of his colleagues to break the sad news to him. The colleague later called the police.
"The reportee was called by his colleague, a KDF officer based at Embakasi Garrison and informed the reportee that he had killed his girlfriend at his rentend apartment," a report from Mihang'o Police Station reads in part.
A team that arrived at the scene said they found the body of Phoebe on the sofa set.
They also recovered the killer weapon and a bucket with blood soaked clothes from the bathroom.
Gitau and his lover were arrested and currently being held at Mihang'o Police Station awaiting arraignment.
Meanwhile, the body of the decesed has been taken to the Defence Forces Memorial Hospital mogue awaiting postmortem.
Top Stories