The suspect was arrested after dispossessing a lady of a Samsung Galaxy Note 9 phone in Ojota Bridge traffic. 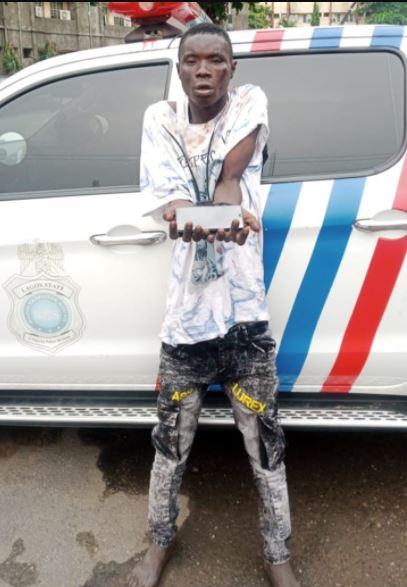 A 22-year-old ex-convict has been apprehended by officials of Lagos Rapid Response Squad (RRS) for traffic robbery three months after he was released from jail.

The suspect, Rilwan Sodiq, was arrested on Sunday, March 5, at Abiola Garden, Ojota after dispossessing a lady driving a Sienna space bus of a Samsung Galaxy Note 9 phone in Ojota Bridge traffic.

Rilwan, with a fractured left arm was working with an accomplice, identified as Sodiq, when he dispossessed the lady of her mobile phone.

He disclosed that Sodiq distracted the lady while he slipped his hand through the passenger's side of the car to pick the smart phone.

Alhaja disclosed that her shouts attracted the attention of the RRS officials monitoring the other side of the road.

“A chase to retrieve the phone from him ensued. The officers, with the support of some good samaritans caught up with him in Abiola Garden. The phone was recovered from his pant after denying he had stolen something," she narrated.

Rilwan stated that he was released from Kirikiri Correctional Centre in December, 2021.

"A month after the release, I broke my arm in a traffic accident”.

Rilwan confessed he has robbed and dispossessed three motorists of their phones in traffic adopting the same method.