I Spent Millions To Train You In School, Don’t Disappoint Me – Nigerian Man Warns Girlfriend As She Begins NYSC Programme (Video)


In the video, the man could be heard saying he spent millions to train her and does not want to regret it. 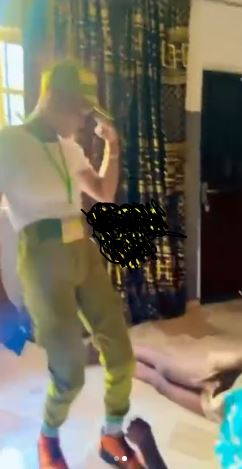 A video has captured the moment a man warned his girlfriend who is a serving corp member that she should not make him regret investing in her.

In a video posted on social media, the girlfriend who seems to have recently returned from NYSC orientation camp was spotted in her uniform.

She was operating her phone while standing over her boyfriend who laid down on the floor. He playfully asked her who she was calling but she laughed it off.

He proceeded to warn her not to disappoint him because he spent millions sending her to school. She then demonstrated the corpers salute to her man as is usually done in camp.