The agreement signed late on Monday night paved the way for the EU to enact a heavily delayed sixth package of sanctions, which includes measures to hit Russian banks and individuals. 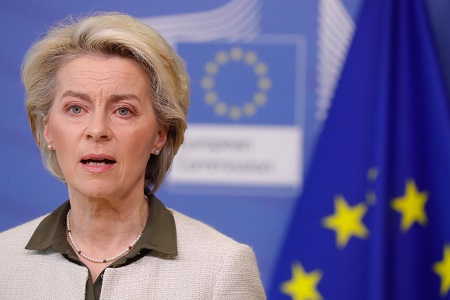 Leaders of the European Union have reached an agreement to ban most Russian oil imports.
The aim is to deprive Russia’s president Vladimir Putin of revenues to fund his war in Ukraine.
FT reported that the embargo, which was agreed after weeks of difficult negotiations, will include oil and petroleum products but contains a temporary exemption for oil delivered from Russia by pipeline. This was intended to grant Hungary, Slovakia and the Czech Republic extra time to wean themselves off crude oil supplies from Russia.
The agreement signed late on Monday night paved the way for the EU to enact a heavily delayed sixth package of sanctions, which includes measures to hit Russian banks and individuals.
The deal followed a stand-off on the oil embargo between the commission and Hungary, which complained Brussels was failing to consider the country’s energy security needs given its reliance on the Russian Druzhba pipeline.
Charles Michel, president of the European Council, hailed the deal, writing on Twitter that it would cut “a huge source of financing for [Russia’s] war machine” and would deliver maximum “pressure on Russia to end the war”.
The ban will include seaborne oil purchases, which cover about two-thirds of Europe’s imports from Russia. In addition, pledges from Germany and Poland to stop oil imports via the northern part of the Druzhba pipeline are expected to take coverage of the ban to 90 per cent by the end of the year.
European governments have not settled on how long the carve-out of Russian oil supplied via pipeline will last, declaring only that it will be “temporary” and that they will return to the matter as soon as possible.
Keeping pipelines out of any initial embargo was a crucial demand for Hungary, which had argued that a ban would put its economy at risk because of its dependence on Russian crude. Viktor Orbán, Hungary’s prime minister, also secured measures to ensure that Budapest could still obtain Russian oil from other sources if there was an “accident” with Druzhba, which crosses Ukraine.
Asked about the length of the temporary carve-out, Ursula von der Leyen, commission president, said it was “very clear” that member states would revert to this topic.
Croatia, she said, could expand the capacity of its Adria pipeline, which runs from the Adriatic Sea, to provide supplies of crude to Hungary. She added that it was helpful to offer extra time to Hungary so that the country could “really switch off” Russian oil.
The partial ban risks distorting competition in the EU oil market, with refineries connected to pipelines from Russia enjoying a price advantage. The price of Russian oil has fallen sharply as European traders have shunned the country’s seaborne crude.
Russian Urals crude is trading at about $93 a barrel, compared with $120 for Brent, the international oil benchmark. While Russian oil delivered via Druzhba may not carry such a big discount, depending on how contracts are structured, Hungarian oil group Mol has said it has enjoyed “skyrocketing” margins for its refineries since March because of the “widening Brent-Ural spread”.
The conclusions from the summit said member states would need to ensure the final sanctions package, which will be settled by EU ambassadors in the coming days, provided for a “well-functioning EU Single Market, fair competition, solidarity among Member States and a level playing field”.
The measures are expected to include a prohibition on the re-export of Russian crude arriving via pipeline. There will also be a ban on the resale of refined products from Russian crude as part of efforts to minimise market distortions. This will kick in after eight months, although the Czech Republic will receive a longer, 18-month grace period.
The west must hold its nerve on Ukraine
The sanctions package also includes the ejection of Sberbank from the Swift global payments system as well as restrictions on more state-owned Russian broadcasters and asset freezes and travel bans on individuals. There will also be a ban on the provision of a range of services to Russian companies.
Brussels proposed the embargo on buying Russian oil in early May, underlining the EU’s difficulties in finding a way to increase its punishment on Moscow while not damaging parts of the European economy that depend on Russian energy.
The EU has already banned Russian coal but has exempted gas from sanctions. Gazprom, the Russian state-owned energy company, has nevertheless cut supplies to Poland, the Netherlands and Bulgaria for refusing to pay for gas in roubles.
Top Stories