The clergy was seen being assaulted by security operatives when he attempted to intervene during the demolition exercise. 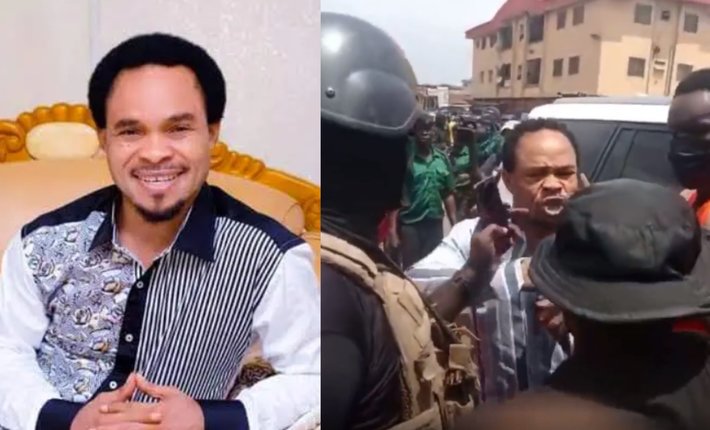 The governor of Anambra state and the Inspector General of police have been asked to apologize to Prophet Chukwuemeka Ohanaemere, also known as Odumeje after he was assaulted by officers of the Nigerian police.
The Coalition of South East Youth Leaders, COSEYL made the demand on Friday.
The group said Governor Chukwuma Soludo, and the Inspector General of Police, Usman Baba must apologize immediately.
Recall that Odumeje’s church, Holy Ghost Intervention and Deliverance Ministry, Onitsha was demolished on Thursday for being built on a drainage channel.
The clergy was then assaulted by security operatives when he attempted to intervene during the demolition exercise.
Reacting, COSEYL, in a statement issued by its President General, Goodluck Ibem condemned the physical assault on the controversial prophet.
The coalition said the assault on the man of God is an insult taken too far, saying it is “wicked, barbaric, villainous, senseless and condemnable”.
“The policemen that were hitting and manhandling Odumeje have no right or power to do so. It is purely unlawful and an outright disrespect to the Nigerian constitution which gives Odumeje the right to human dignity.
“The policemen and the entire members of the taskforce team crossed the line in whatever they thought was their assignment. The infringement on Odumeje’s rights to liberty and human dignity will not be entertained.
“If these policemen and the entire taskforce team have the effrontery to manhandle Odumeje in such a manner, it then means that the ordinary people who have no voice or anyone to speak for them will be killed and buried without any trace to their corpse (s).
“We demand the immediate arrest and prosecution of the policemen and the taskforce team involved in such a shameful and despicable act on a highly respected Man of God.
“We demand an immediate apology from Governor Chukwuma Soludo and the Inspector General of Police, IGP Usman Baba over the manhandling of Prophet Chukwuemeka Ohanaemere, a.k.a Odumeje”.
Top Stories