It was that the truck driver lost control when a Camry car suddenly stopped for passengers crossing the road at Mowe Junction. 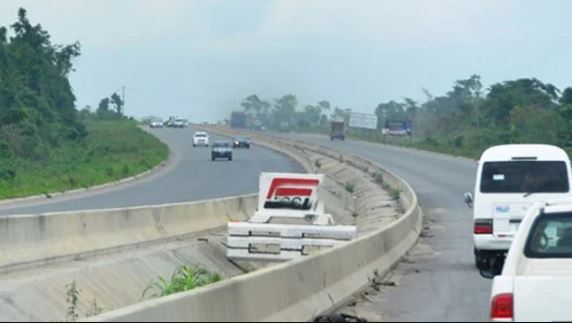 Some pedestrians have narrowly escaped being killed along the Mowe Junction of the Lagos-Ibadan Expressway.

They escape death on Saturday when a truck fully loaded with soya oil overturned, spilling its content on the road.

The incident which occurred around 2:15pm

Sunday PUNCH learnt that the truck driver lost control when a Camry car suddenly stopped for passengers crossing the road at Mowe Junction.

Sunday PUNCH observed that the residents, including men and women, scooped the oil running through the middle of the road, while the driver and his boys tried to transfer the spilled oil into another truck.

An eyewitness who identified herself only as Kikelomo, said, “I was standing when suddenly the truck fell down and thank God it didn’t hit the people crossing the road. It would have been a big problem. There was one private car that stopped, and suddenly the next thing I saw was the truck spilling its content on the road.’’

Another eyewitness, Saheed Mohammed, told our correspondent that the incident would have been averted if the commuters used the pedestrian bridge.

“It was those crossing the road that caused the accident. They have told them many times not to cross the expressway again but they wouldn’t listen. What is difficult about using the bridge for their safety?,” he added.

As of the time our correspondent left the scene, men of the Federal Road Safety Corps, Nigeria Police Force and the Ogun State Traffic Compliance and Enforcement Corps had arrived at the scene.

He said, “It was an accident. The vehicle carried soya oil and the product spilled on the road. To avoid another accident there, we posted police officers to the place. It can only be lifted with a crane. Pending when that will be done, officers will be there.

“It is unreasonable for anybody to be crossing expressways where there are pedestrian bridges. It is due to the nature of the road, that’s why the pedestrian bridge was constructed. If that is the cause of the accident, we will investigate and necessary actions will be taken.”