Empress pointed out that some things have been brought to her attention but that it isn't the right time to speak as she wants to mourn in peace. 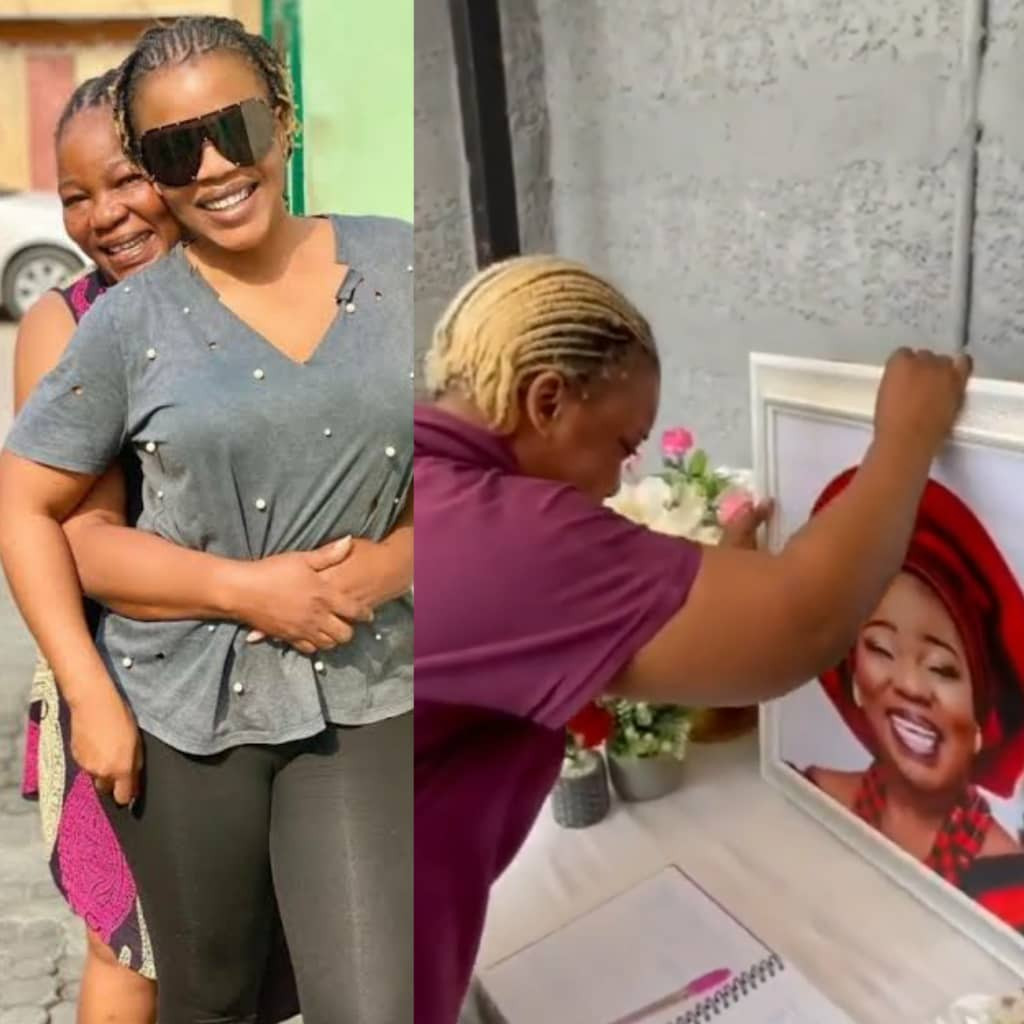 Nollywood actress, Empress Njamah has said she will speak at the right time after the family of her late close friend and colleague, Ada Ameh 'attacked' her.
Recall that Ameh passed away on Sunday, July 17.
In a post she shared on her Instagram page on Thursday, July 28, Empress pointed out that some things have been brought to her attention but that it isn't the right time to speak as she wants to mourn in peace.
She said when it is time to address the issue, she will. She wrote;
''KEEP SLEEPING MY SWEET TROUBLE…
My joy is that I posted this video smiling,thought I was going to soak my pillow with tears but all I did was smile…glad I can now get on my phone and have the strength and courage to type,IT IS WELL,it’s amazing the things am seeing on social media,many things brought to my knowledge,it’s not the right time to speak,let me mourn in peace BUT it’s really a pity,there is time for everything,and the time for me to talk will surely come but for now let me heal,thanks to all who reached out,could not pick calls and reply messages but I never forget @adaameh I miss you sha,but you are in a better place"
Her post however came hours after the family members of late Ada accused persons of ''setting up condolences and mourning houses without their consent'. Recall that Empress set up a condolence register for late Ada in her home on July 19.
The family in their post also mentioned that some persons had gone ahead to declare that she had no living family members and signed death notifications on their behalf.
The statement read;
''The family of Obande Ameh have received several calls and attacks from some followers and fans of Ada Ameh for the collaborations done on her page by her younger sister Ameh Abahi and her husband Hotom Azuma.
It saddens us to realise that the public prefer to hear that Ada Ameh has no living family members so that they can sympathise than hear truths from the family members.
It is obvious to us that our intentions have been largely misinterpreted and twisted by strangers who want to continue to promote the wrong narrative about our family.
The family stayed quiet on her death for a while till we got her remains back home. During this period, we received several calls of people setting up condolences and opening mourning houses without the family's consent, while some had gone ahead to declare that she had no living members of her immediate family and signed death notifications on our behalf.
We thought it wise to collaborate on her page to bring the correct information to her fans who are also griefing. We had no ill motive. Our talk is a way of relieving the pains we feel. You can do well not to add to it.
We will give information concerning the burial plans still in collaboration tomorrow for your perusal. We covert all your prayers as a family. God bless you all.'' 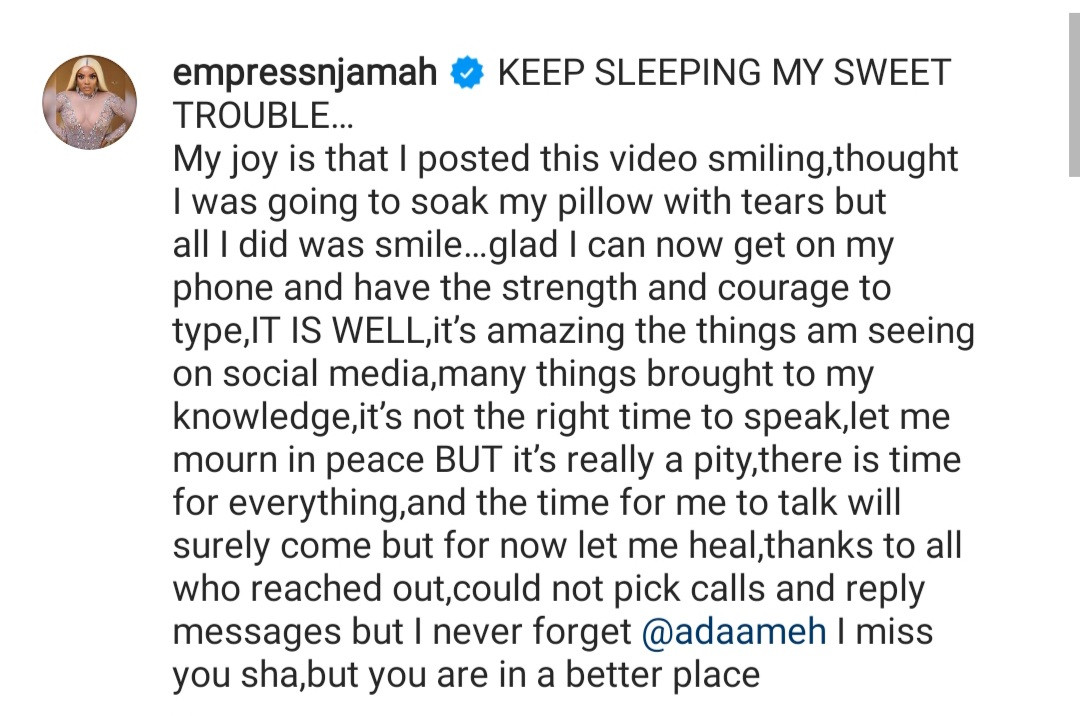 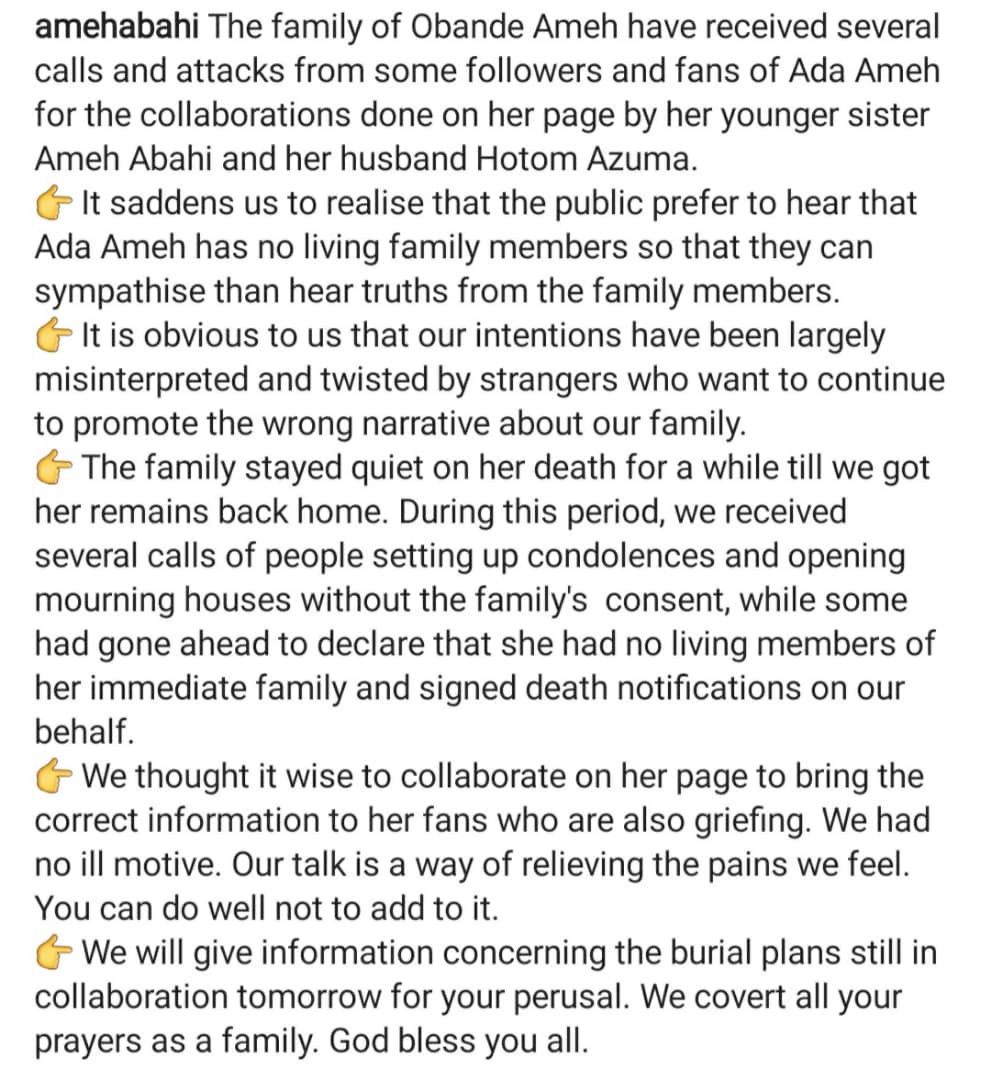