According to one Nafiu Saleh Adamu, the duo left Kano for Lagos on Thursday, September 15, 2022, and have not been seen since then. 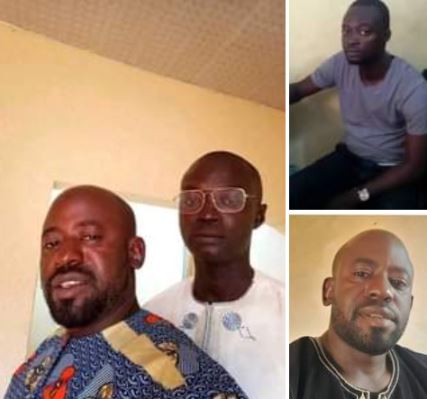 The two friends went missing after they boarded a vehicle from Kano State to Lagos but never made it to their destination.

According to one Nafiu Saleh Adamu, the duo left Kano for Lagos on Thursday, September 15, 2022, and have not been seen since then.

Mr Adamu said all efforts made to find them had yielded no results and their phone numbers could not be reached.

He added that Munir's call to Jamilu's brother on Friday, September 16, informing him that their vehicle broke down in Lokoja, was the last time they heard from them.

Read the post below: Dear FAFs, Attached are pictures of my two younger brothers Munir Abubakar and Jamilu Musa who left home (Kano) on Thursday 15/09/2022 to Lagos (Place of their businesses) but they are no where to be found either or in between the two destinations.

All efforts to trace their boarding records at Kwanar Dawaki motor park yielded no results. The checks covered Thursday 15/09/2022-Saturday 17/09/2022 and no single manifest contain information about them.

He (Munir Abubakar) last phone call was on Friday 16/09/2022 around 5pm to Jamilu’s elder brother Garba Musa Ali telling him that they were in Lokoja because their vehicle broke down. And ever since then their lines couldn’t be reach again.

This update is to intensify effort toward searching for their whereabout and at the same time solicit for FAFs prayers. May The Almighty God in His Infinite mercy expose everything that’s hidden to us relating to Munir & Jamilu’s whereabout and more. 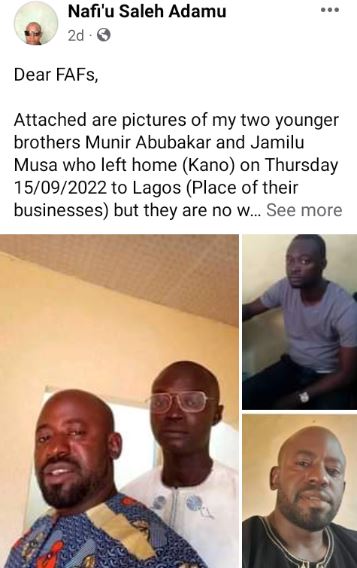 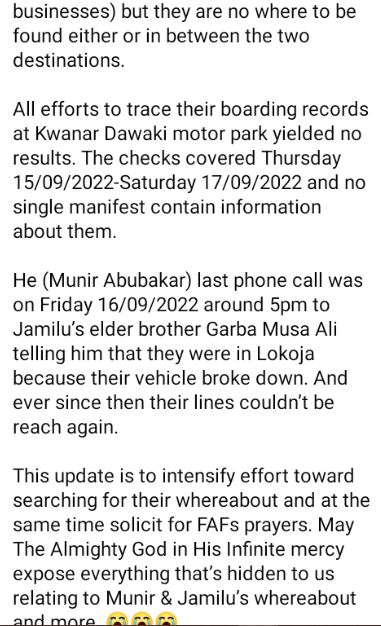