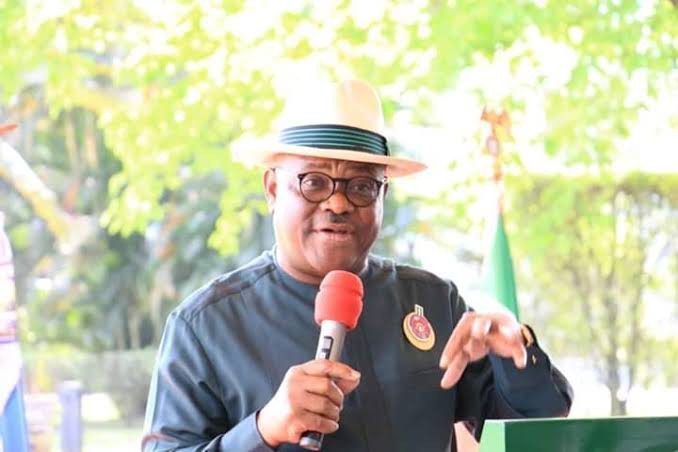 A meeting in Port Harcourt between Governor Nyesom Wike and members of the Board of Trustees (BoT) of the Peoples Democratic Party (PDP) has ended in a deadlock.
It was gathered that the meeting ended with parties agreeing to continue with the reconciliation meeting in Abuja.
THISDAY reported that the meeting was part of efforts to resolve the post presidential primary crisis plaguing the party. The Rivers State governor is at the centre of the crisis following his call for the resignation of the National Chairman Iyorchia Ayu.
Led by the former Senate President Adolphus Wabara, the BoT members said their meeting with the Rivers state governor was progressive and expressed hope that soon the party’s internal crisis will be sorted out peacefully.
The meeting, which lasted four hours had Dr. Ibrahim Idris, Chief Okwesilieze Nwodo, Chief Shuaib Oyedokun,  Kabiru Tanimu Turaki (SAN),  Dame Dr. Esther Uduehi and Hajiya Zainab Maina on the  BoT delegation.
On the part of Governor Wike, were the Rivers State PDP chairman, Ambassador Desmond Akawor, Rivers Elders Forum chairman, Chief Ferdinand Alabraba, former deputy speaker of House of Representatives, Rt. Hon. Chibudom Nwuche, Senator Adawari Pepple, Elder Emmanuel Anyanwu,  Senator Olaka Nwogu and Dr. Sam Sam Jaja.
Addressing journalists immediately after the meeting, Senator Wabara said the meeting afforded them the opportunity to properly understand the concerns of Governor Wike and are better informed about the crisis.
Senator Wabara said they were taking what they have gathered from Governor Wike back to the larger BoT house in Abuja for proper decision on the issue.
“We’ve been rubbing minds with His Excellency, the performing governor of Rivers State, Mr. Project. I think the meeting took about four hours.
“We have not concluded. It’s always easy to destroy but to make up, to make peace takes some time. But I think we are better informed, we have gotten some information. Every coin has two sides. We have been briefed by His Excellency. We will go back to Abuja to re-digest all that we gathered from His Excellency. We had very frank talks.
“I’m acting chairman of the Board of Trustees of this party. I do not have the exclusiveness to stand here and tell you what the Board of Trustees will come up with. We have come here, we are going back, we will convene a meeting of the Board of Trustees, brief them and that is when Nigerians will hear where the Board of Trustees stands. Since it is an advisory body, conscience of the party, we will be there to tell the party the truth and nothing but the truth about our findings.”
He said, since this was the first meeting of the BoT intervening in the crisis, they were optimistic of attending to the issues as a family, adding that with Wike’s cooperation and other aggrieved four governors, PDP will win at the 2023 general elections across the country.
“But one good thing is that this family remains one. You know, we are still under the umbrella called PDP and by the special grace of God, we will end up very victorious and we will end up in the Villa in May 2023 with his cooperation and support of other governors; four of them. I think we will make progress, no doubt about it.”
Wabara, further described governor Wike as an important asset to the PDP, pointed out that the governor’s infrastructural development in Rivers State is already campaigning for the party.
“Presidential campaign has started and it is the policy of our great party that we will all go home, His Excellency is here and campaigning for the party. I will go to Abia state where I come from and campaign, you know there is no ballot box for me in Abuja. Every one of us here are from one zone or the other.
“Our Governor here is a PDP governor. Even if he doesn’t come out to campaign, he has campaigned already with all the projects he has given in Rivers State and Nigeria as we speak”, Wabara stressed.
Also addressing journalists, Governor Wike said what is important to all of them is to ensure that the unity of the party is not endangered.
Governor Wike reiterated that he and his allies were not leaving the party, but are more interested that the contending internal issues be addressed adequately.
“What’s important is that the house is united for the war that is coming in front. So, for me, the issues of whether they achieved peace or not today is immaterial. What is material is that PDP is united.
“What is important is to have unity, even if it takes you longer days. I think that is the message he(Wabara) is conveying.
“We have said repeatedly that we are not leaving the party. We have said so. But that does not mean that there are no internal issues that ought to be sorted out. I think what they are here for is to see how they can sort out some internal issues.”
On whether he was hopeful the internal crisis would be resolved, Wike replied: “Once you are alive, why won’t you be hopeful. It’s only a dead person that is not hopeful. So, being alive means you are hopeful.”
Top Stories