Haaland has scored 20 goals in just 13 appearances for City since his move from Borussia Dortmund, including five in three Champions League outings. 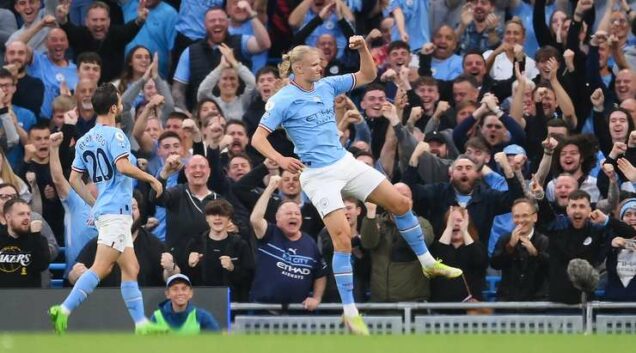 Manchester City manager, Pep Guardiola has praised his star striker, Erling Haaland.
Guardiola said the player is a nice guy and understands things quickly.
Haaland has scored 20 goals in just 13 appearances for City since his move from Borussia Dortmund, including five in three Champions League outings.
The Norwegian hit a brace in a 5-0 home victory over Copenhagen in the competition last week and will likely play a central role when City look to confirm their place in the knockout stages by winning Tuesday’s return fixture in Denmark.
Speaking on the eve of that game, Guardiola compared Haaland’s recent displays to his first few outings with City, hailing the 22-year-old for improving his all-round contribution.
Asked how Haaland had adapted to City’s style, Guardiola said: “If this happened, it works so far. Of course, we adapt a little bit, he adapts… we got to know each other on and off the pitch.
“But he settled perfectly and quickly because he’s a nice guy, he understands things quickly. We know we have an incredible threat with him, and at the same time he knows what he has to do. When this happens, situations come easily.
“He’s absolutely one of the best, no doubt about that. I had many strikers, they were all very, very good and Erling is one of them. The numbers speak for themselves.
“At an early age, how many goals he has in the Champions League, in Norway, Austria, Germany and now England… I speak a lot about him, but sometimes I should not say anything and just look at the numbers, it would be enough.
“Against Bournemouth [in August], I remember he was not involved much in the game, now he’s much, much more involved, not just to score the goals.
“We know when he arrives in the final third or the box, he has a special instinct to know where the ball is going to finish and put it in the net. That’s why he’s an exceptional striker.”
Haaland has scored a remarkable 28 goals in 22 Champions League games during his career. His next goal in the competition will see him equal the tallies of David Trezeguet (in 58 appearances) and Patrick Kluivert (71 appearances).
The striker will be one of few elite players to get a prolonged break during the middle of the season, with Norway having failed to qualify for the World Cup.
However, Guardiola says the tournament will not influence any decision to rest Haaland in the future, adding: “No, I don’t think about selection thinking about the World Cup.
“The national trainers will decide how to handle the players when they get there. They don’t think about us, we don’t think about them.
“[On Tuesday], I’m going to decide the selection. I have to speak with the players, the doctors and physios, and decide what’s best. We’ll see.”
Top Stories