He was granted bail in April, 2017, for medical reasons. However, Mr Kanu fled the country after an invasion of his home by the military in Afaraukwu, Umuahia, Abia State. 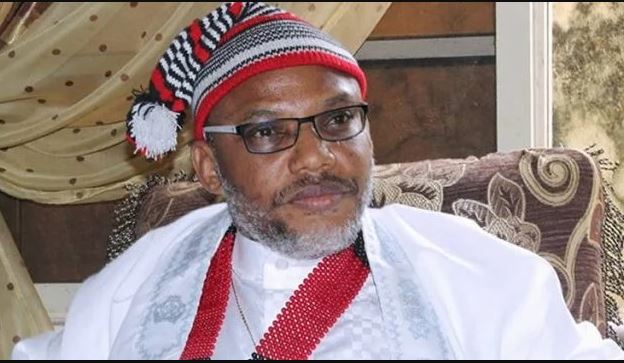 Afaraukwu, the Abia State country home of Mazi Nnamdi Kanu, the leader of the Indigenous People of Biafra, IPOB, has been seized by uncertainties.

DAILY POST reports that when the news broke that the Appeal Court had ordered for Kanu’s release, there was wild celebration in the area. However, the hopes that Kanu would join his kinsmen soon became slim after the Attorney-General of the Federation, Abubakar Malami hinted otherwise.

Recall that Kanu was earlier in October 2015, arraigned by Nigerian authorities on an 11-count charge bordering on terrorism, treasonable felony, managing an unlawful society, publication of defamatory matter, illegal possession of firearms and improper importation of goods, among others.

He was granted bail in April, 2017, for medical reasons. However, Mr Kanu fled the country after an invasion of his home by the military in Afaraukwu, Umuahia, Abia State.

In 2021, Kanu was rearrested in Kenya and repatriated to Nigeria. He was then re-arraigned.

With his people celebrating his freedom, Malami is saying otherwise, with his assertion that Kanu was only discharged and not acquitted.

Kanu’s kinsmen from the Ibeku ancient clan in Umuahia North Local Government Area of Abia State are now worried that the Federal Government may not obey the Appeal Court order.

During an interview with DAILY POST, weekend, the President General of Isiama Afaraukwu Ibeku community (Kanu’s country home), in Umuahia North Local Government Area of Abia State, Chief Ikechukwu Nwabueze maintained that it would create be a bad signal for the Nigeria nation should the federal government fail to comply with the order of the court and release Nnamdi Kanu from the DSS detention facility.

He insisted that Kanu committed no offence in exercising his fundamental rights in seeking secession for Ndigbo who had been marginalized, especially under the present democratic system in Nigeria.

Mr Nwabueze, who also faulted the recent position of the federal government, admonished the Attorney General of the Federation and Minister of Justice, Abubakar Malami “not to push Nigeria into regional and international abyss of mockery and charlatanism with far-reaching consequences on the country’s socio-economic development, regional and international human rights, rule of law and democracy ratings and trade and investment policies, including foreign direct investments (FDI)”.

According to the President General, “the Nigerian government’s disregard and disobedience to the unanimous judgement of the three justices of the Court of Appeal was expressly stated by Malami.

“The arrogation of the interpretative power by Malami, including what to obey and what not to obey in the landmark judgement is also tyrannical, vexatious and democratically calamitous. It equally does not augur well in the collective efforts of all stakeholders towards addressing the core demands of the secessionist group and for the government and the pro-biafra group, IPOB to adopt a political solution in achieving peace in the land”.

Also baring his mind on the confusion, Chief Emeka Ezebuiro advised the Buhari-led administration to consider the court’s ruling in order to douse tensions and calm nerves necessitated by Kanu’s re-arrest in Kenya and his continued incarceration in DSS detention facility.

He dismissed the assertion by Malami that Nnamdi Kanu was discharged not acquitted of the treason charges, warning that total disregard of the Appeal Court ruling for Kanu’s release by the current federal government will set the country on a bad pedestal.

Ezebuiro urged the Federal Government release the IPOB leader to halt economic losses and extra judicial killings of innocent Igbo youths who are agitating for their rights, alleging that “it’s now clear that the present democratic government under President Muhammadu Buhari has failed to include igbos in sensitive decision making process in the governance of the country.”

Meanwhile, another member of the community told the Federal Government to end the drama and release Kanu.

“The IPOB leader has lost his parents; his father was our renowned traditional ruler. So, he has paid enough price already. They should allow him to come home; we are waiting to receive him,” he noted.