According to him, he bought pepper soup worth N7,000 from the actress’ restaurant at Lekki but was served three bones. 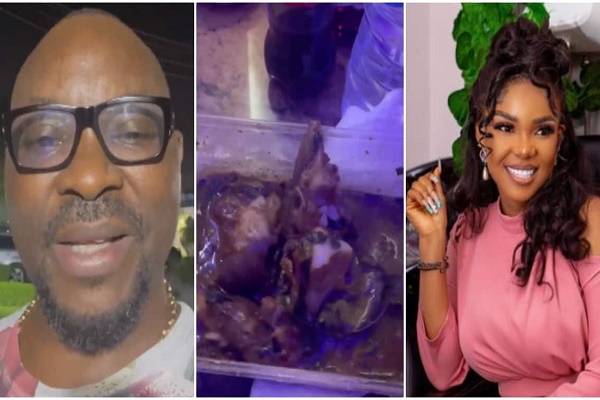 Isaac Fayose has tendered an apology to actress, Iyabo Ojo.
The younger brother of former Ekiti Governor, Ayo Fayose had called out the actress and complained after he was served three bones for N7,000 pepper soup at the actress' restaurant in Lekki.
In a now-deleted video which was shared on his Instagram page, Fayose narrated his spat with the popular movie star.
According to him, he bought pepper soup worth N7,000 from the actress’ restaurant at Lekki but was served three bones.
He explained that he has been a regular customer of her restaurant for the past one year but wasn’t satisfied with this particular service.
He called his cousin, Toyin Lawani to speak to her friend about the situation, noting their services was declining.
But to his chagrin, Fayose stated Ojo called to blast him, insulting him that he was poor and was only looking for cheap popularity reason why he’d make a video of the bowl of pepper soup in the first place.
He said: “I bought pepper soup from Iyabo Ojo in Lekki 1 and they gave me three bones and I complained. Iyabo Ojo started abusing me. She called me to abuse.
“She said I’m looking for cheap popularity. That if I’m not looking for cheap popularity, why will I do that. Because I did a video and I sent to my cousin Toyin Lawani. That advise your friend that the service is going down.
“I’ve been buying food from Iyabo Ojo’s place for the past one year, I have all my receipts here.
“Iyabo called me and started saying all sorts to me that I’m poor, that’s why I’m asking for the next round. And she banged the phone on me.
“My people, watch this video see 7k pepper soup and tell me; will you buy it?”
Then he proceeded to share a video showing the bowl of three bones in form of 7k pepper soup while reiterating the dish was way too poor for the amount; reinforcing his stance that their service has really dwindled.
However, in a more recent video, Fayose apologised to Ojo for prompting in her the ‘feeling that he was trying to mess up her business’.
He reiterated that he has been her customer for one year and ‘had never complained’ while he recounted the incident all over again.
Fayose adopted Davido’s motto ‘we rise by lifting others’ in his caption while urging Ojo to let things slide but added, “Please I am still patiently waiting for my sorry”.
Top Stories