Ronaldo broke down in tears after Morocco eliminated Portugal from the World Cup over the weekend. 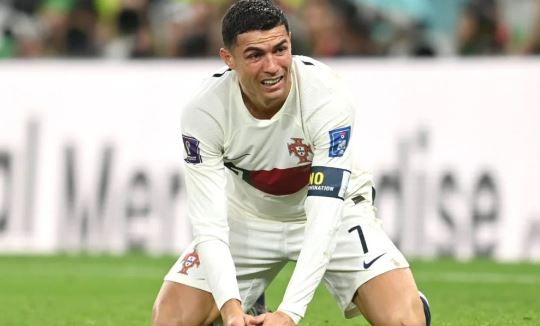 Elma Aveiro, the sister of world-famous footballer, Cristiano Ronaldo, has reacted to a video of her brother crying following Portugal’s 2022 FIFA World Cup exit in Qatar.

Ronaldo broke down in tears after Morocco eliminated Portugal from the World Cup over the weekend.

The former Manchester United forward was seen crying as he made his way down the tunnel after the final whistle of the match.

The 37-year-old had come off the bench as Morocco defeated Portugal 1-0 in the World Cup quarter-final tie following Youssef En-Nesyri’s only goal of the match.

Ronaldo then left the pitch in tears as they were dumped out of the 2022 World Cup by Morocco.

Reacting, Aveiro, in a post via her Instagram account on Monday, said the video of Ronaldo crying was beautiful and she could not get tired of watching it.

“Beautiful image, love, gratitude, value, are values that not everyone has… Beautiful is this video that I don’t get tired of watching and it’s not Portuguese, I don’t know if I made myself understand greater pride, greatest human being, great son, brother, father, an example to all and all.

“Thank God for giving me as a brother this boy/man that I’m so proud of and love with all my strength. Thank God. Thanks, Ronaldo,” She posted alongside the video.