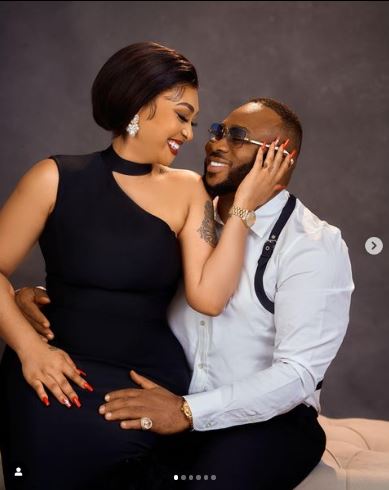 Olakunle Churchill, the popular Nigerian entrepreneur, and his wife, Rosy Meurer, a Gambia-born Nollywood actress, are marking their third year of marital union.

In a series of Instagram posts, the businessman penned several heart-melting notes in reaffirming his love for Meurer.

“To my wife, I could write a million things you do that make my heart flutter but I still wouldn’t be able to write it all because they are limitless,” he wrote.

In another post, Churchill said his wife made his life “thrilling, dazzling and continuously youthful”.

“Everyday, you have shown me that age has no significance where there is true love and it feels like I’m living my young days again and this makes up for all the times missed,” he said.

The actress also reciprocated with a post accompanied by a long caption where she described Churchill as the “King of my Heart.”

In the post, Meurer explained that contrary to the idea that love is blind, she believes that “love is all-seeing and accepting.”

“Love is accepting the bad habits and mannerisms and working around them,” she wrote. “Love is recognizing all the fears and insecurities and knowing your role is to comfort. Relationships last not because they were destined to last.

“Relationships last long because two people made a choice to keep it, fight for it and work for it. Thank you @olakunlechurchill for making this choice with me.”

She further expressed her appreciation to her husband for choosing to stay, despite the “struggles and bumps along the way”.

“HAPPY ANNIVERSARY TO THE KING OF MY HEART,” she continued. “Thank you for understanding the meaning of “LOVE” We may have struggles and bumps along the way but what is important is that we always have each other. No matter how many times we fight in a day, the love that we share is incomparable.

In 2021, Olakunle confirmed that the two love birds had tied the knot, to the surprise of many.

Their marriage was blessed with a son, Omoniyi, in 2021.