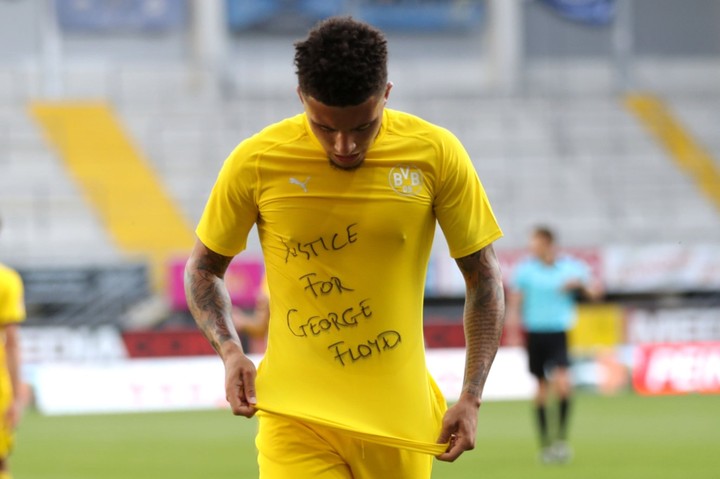 Jadon Sancho pays tribute to black man, George Floyd killed by white police officer
Jadon Sancho's return to Borussia Dortmund first team after gaining full fitness saw him bag a hat trick as they defeated strugglers Paderborn.
Borussia Dortmund were grateful for Jadon Sancho's return to full fitness as they defeated strugglers Paderborn.
Jadon Sancho marked his return to the Borussia Dortmund XI with a hat-trick and a political message as they thumped Bundesliga strugglers Paderborn 6-1 on Sunday.
Sancho was restored to the line-up for the first time since the coronavirus-enforced break after a disappointing midweek defeat to Bayern Munich saw the defending champions move seven points clear at the summit.
That reverse prompted fresh speculation regarding head coach Lucien Favre's future, but Sancho helped his second-placed side get back on track as they look to secure Champions League qualification.
Although Dortmund were frustrated until the 54th minute at the Benteler-Arena, Thorgan Hazard's opener was swiftly followed by a second from Sancho, who would later net again after Uwe Hunemeier brought Paderborn back into the contest, with Achraf Hakimi and Marcel Schmelzer adding gloss to the scoreline.
The England international rounded off his treble in the 92nd minute by capping a rapid Dortmund counter-attack.
Sancho celebrated his first by revealing a T-shirt bearing the message "Justice for George Floyd" in reference to the black American who died in an incident involving a police officer in Minnesota this week, prompting protests across the United States.
Bundesliga colleagues Weston McKennie and Marcus Thuram had similar tributes earlier in a weekend that concluded with Dortmund's return to winning ways.
Top Stories