The woman who was until her sack a staff of the ministry of health was later revived and taken home. 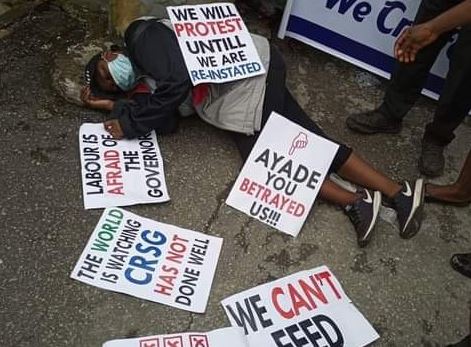 An unidentified lady slumped on Monday September 21 in Calabar while protesting against her sack by the Cross River State Government.

Governor Ben Ayade had mid 2019, directed the delisting of about 2,500 names from the payroll of the Cross River State government, claiming that most of those employed between 2014 till then did not follow due process.

The sacked workers on Monday blocked access to the state secretariat in protest over what they described as “unfair and illegal delisting from the state payroll.”

The protesters who carried placards with inscriptions ‘we shall protest till the end’, ‘Head of Service should be sacked’’, ‘Ayade you betrayed us’, said they were tired of not hearing from the government and that the state labor union is complicit in their plights. 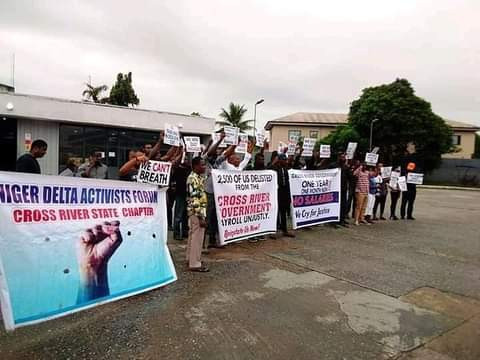 Speaking to newsmen, Comrade Paul Ajie Abang who led the protesters said that they had initially given the state government a seven-day ultimatum to take action or face a massive protest and that it was their silence that has led to the peaceful protest.

Abang disclosed that the group had met with the Head of Service and all other relevant stakeholders to iron out the matter but it seems the government is insincere and doesn’t want to act, and that the group will not back down till the right thing is done. 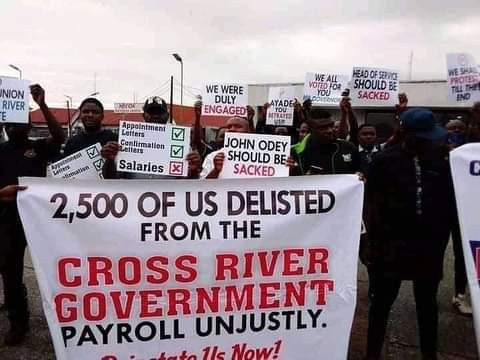 “We are the 2500 staff of the state government who were duly employed, got their appointment letter, and then delisted from the payroll by the government. We are taking this struggle upon ourselves because labor has failed us. We are out here fighting for our rights and we have no plan of leaving here until our voices are heard.” he said.

"We are here to let the world know of the injustice being meted to us. for a year and one month now we have not received our salaries and the government is tossing us around.” He added.

Meanwhile, it was gathered that the woman who was until her sack a staff of the ministry of health was later revived and taken home.