Nigeria's President Muhammadu Buhari has been bashed by the Trade Union Congress over the decision to spend $1.96bn on the rail. 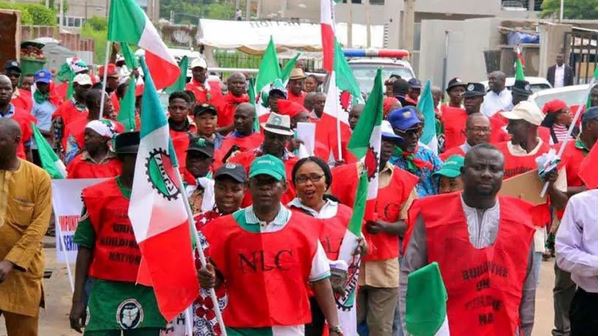 Labour
The Federal Government has been lambasted by the the Trade Union Congress (TUC) over the decision to spend $1.96bn to construct a rail line linking Nigeria to Niger Republic.
The TUC described the decision as “an insult and waste of our scarce resources.”
In a statement titled “Rail construction to Niger Republic: What for?” the TUC stated by this latest move it has become clear managers of the country have ulterior and sinister motives.
The statement was signed by the TUC President Comrade Quadri Olaleye and its Secretary-General, Comrade Musa-Lawal Ozigi, on Thursday
It reads: “The Congress is not averse to development. Constructing rail lines to Kano, Katsina and Dutse is understandable; but why extend it to Niger Republic?
“Why should we borrow from the IMF, World Bank and China to build a rail line to Niger Republic? Is there something this government is not telling us?
“How could the Federal Government come up with such an idea in a country where potable water has become a luxury; right to electricity is regarded as a taboo for an average citizen, roads have become death traps and our health facilities lack malaria drugs? That sum – $1.96bn when exchanged at the rate of N380 per dollar is almost N800bn. This can do a lot in the economy.
“The outbreak of the pandemic has exposed Nigeria to the world: our federal government was begging for ventilators and nose masks!
“Our education sector is in shambles. Agreements reached with the Academic Staff Union of Universities (ASUU) over a decade ago are yet to be met.
“We are celebrating six decades of independence yet Ghana, South Africa, etc. are threatening and treating Nigerians in their country with disdain. It hurts. It really does!
“According to a report from the Debt Management Office, Nigeria’s total debt rose to $79.5 billion (N28.63 trillion as of the first quarter of 2020).
“Debt servicing gulps trillions of naira yearly. News had that Nigeria’s sovereignty is at stake if the country fails to pay China! How could the Federal Executive Council (FEC) accept such now? Or, has the Niger Republic annexed Nigeria?
“Government has not completed the road that connects Nigeria with other Western African countries yet the President Buhari-led administration approves construction of a rail line to Niger!
“What is Nigeria paying for? Or, could this be another way of looting our commonwealth in preparation for the 2023 electioneering campaign? The whole thing is becoming more confusing.
“The Lagos- Ibadan expressway services every vehicle coming into Lagos, including the ones from Kano, Katsina and Dutse; why has it not been completed?
“The Niger Delta that lays the golden egg does not have good roads and potable water. They neither fish in their water nor go to the farm because of oil spillage.
“Yes, it is true the NDDC was supposed to provide most of the basics; unfortunately, the reverse is the case because of corruption.
“Those appointed to manage the Commission ended up looting it dry. None is in jail because in the very first place it was a political settlement.
“Since someone fainted during the National Assembly probe of the Commission, we have not heard anything again on the matter. It is shameful it happened at a time our ‘incorruptible’ President holds sway.
“All we are saying is that Charity begins at home! This is not the time for profligacy and licentious spending; the government must manage our lean purse prudently.
“We must set our priorities right because Nigeria is becoming a laughing stock to the whole world. Tinkering with such ideas at a time the electricity tariff has been increased and fuel price hiked is indeed suicidal. Nigeria should stop playing big brother at the expense of Nigerians. This government is not being fair to Nigerians. Simple.”
Top Stories