Ondo voters in the just concluded governorship election sold their votes between N1,000 to N7,000. 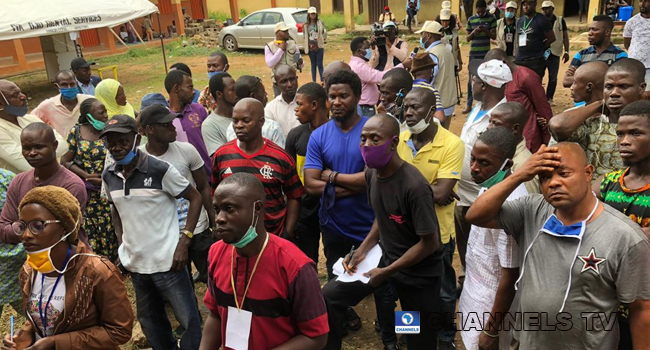 Ondo election voters (File photo)
It has been revealed that voters at the recently concluded governorship election in Ondo state sold their votes between N1,000 to N7,000.
The shocking revelation was made by civil rights organisation, YIAGA Africa. The group condemned the high incidence of vote-trading recorded in the October 10 Ondo State governorship election.
The organisation said it was disturbing that the criminal act of vote-buying happened under the nose of security agents.
The Executive Director of YIAGA Africa, Samson Itodo, made this known while speaking on a television programme in Abuja on Monday morning.
Itodo, who stated that YIAGA Africa deployed 646 observers for the election, said, “The vote-buying that we saw in this election is quite disturbing. Nigeria needs a national campaign and a national discussion around vote-buying.”
He said a situation “where elections are determined by the highest bidder or the highest spender makes a mockery of our democracy, it diminishes human dignity but most importantly, it also questions the legitimacy of election outcomes.
“For Saturday election, votes were traded between N1,000 and N7,000 in the state.”
Continuing, Itodo said, “What is disturbing is the level of impunity of political actors who engage in this illegal and corrupt act. You go to polling stations and polling stations have become market places, where in the full glare of security agents who are deployed to the polling stations, people were just buying votes and nobody reprimanded or arrested them.
“What that tells you is that it appears we have accepted this as a norm and as part of our electoral process and it is very sad.
“The menace of vote-buying is a governance problem, it is an indictment on the political class that they failed to lift people out of poverty, to provide the dividends of democracy and so they use that against the people.”
The YIAGA Africa boss, however, commended the Independent National Electoral Commission for the successful conduct of the election.
He noted that widespread violence was not recorded on the election day which showed that the peace accord signed by the political parties was effective.
“What we saw in Ondo State (election) is an improvement from the Edo election where INEC improved on logistics’ deployment for the election.
“We also saw a situation where, in a very competitive election of this nature, the pre-election environment that was fraught with all forms of violence wasn’t the case on the day of election.
“What that suggests is that all the entreaties and the attempts to neutralise the threats of violence were effective including the peace accord that was signed by the parties and so, we didn’t record widespread violence although there were some attempts to disrupt the elections, it was nipped in the bud.
“The fact is that the Ondo people have decided who their governor would be. The votes declared by INEC is a reflection of the ballots cast, so, that election or the results should be trusted by the candidates.”
Recall that INEC declared Governor Rotimi Akeredolu of the All Progressives Congress winner of the keenly contested poll having defeated his estranged deputy and Zenith Labour Party’s candidate, Agboola Ajayi; as well as Peoples Democratic Party’s Eyitayo Jegede.
Top Stories