However, the team got their revenge by claiming a 2-0 victory in the reverse fixture in Douala, Cameroon on Sunday. 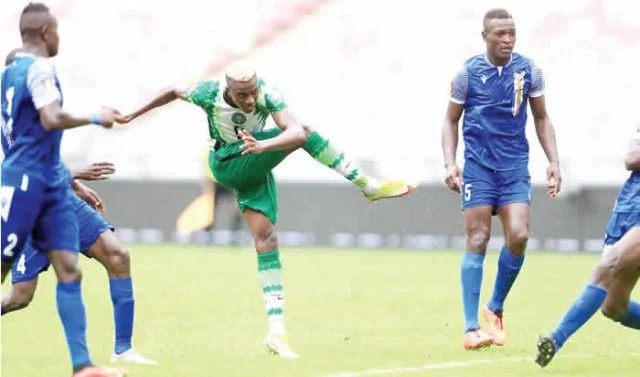 The Super Eagles on Sunday defeated the Central African Republic.
Recall that the Nigerians had some days ago suffered a shock 1-0 loss to Central African Republic in the 2022 World Cup qualifying game at the Teslim Balogun Stadium, Lagos.
However, the team got their revenge by claiming a 2-0 victory in the reverse fixture in Douala, Cameroon on Sunday.
Karl Namnganda silenced Lagos fans on Thursday, finding the back of the net in the first minute of injury time after a mistake by Leon Balogun to hand Nigeria their first home defeat in a World Cup qualifying game in 40 years.
Balogun, however, turned from villain to hero, scoring the Eagles first goal on Sunday which was played at Japoma Stadium in Douala.
The Glasgow Rangers defender, found the back of the net just before the hour mark, latching unto a long pass to give the Eagles the lead after a cagey start to the game.
The Eagles’ continuous domination after their first goal paid off in the first half regulation time, as Napoli striker Victor Osimehn doubled the lead from close range, connecting with William Troost-Ekong’s cross.
The goal was Osimhen’s eighth for Nigeria in 16 international appearances.
Both sides went back to the dressing room with the Eagles firmly in control.
Though the Eagles had more opportunities to increase the tally in the second half, no further goals came as the game ended 2-0 in favour of Nigeria who lead the group with nine points from four games.
Coach Gernot Rohr made three changes to the squad to lost on Thursday, handing a start to captain Ahmed Musa, who earned his 101st cap in the process to become Nigeria’s highest capped player.
Musa took the place of CSKA Moscow’s Chidera Ejuke in the starting 11, while Chidozie Awaziem and goalkeeper Maduka Okoye started in the place of Ola Aina and Francis Okoye respectively.
Meanwhile, Eagle coach Gernot Rohr said the team achieved its objective of wanting to take revenge after Thursday’s loss.
Speaking after the game, Rohr said the team resulted to changing their system, playing three players at the back which helped them achieve victory. He also praised Musa’s leadership.
“It was a good one for the team. We lost the other day in the last minute and everybody wanted to take revenge.  They did it very well. Even we could have scored a third goal,” Rohr said.
“We played three in the back we changed our system, played three in the back and this helped and the leadership of Ahmed Musa in this game. It is not easy to beat the CAR. There were lots of fouls.

“Now we can prepare for the next game in November and I hope that everything would be fine at the end of the day and thank you to Nigerians for their support all the time. We have a young team and we made some mistakes but we won’t give up.”
Top Stories