The victim, her friend and some other road users were kidnapped last Friday near the Sat Guru Maharaji Garden at the Ibadan end of the expressway. 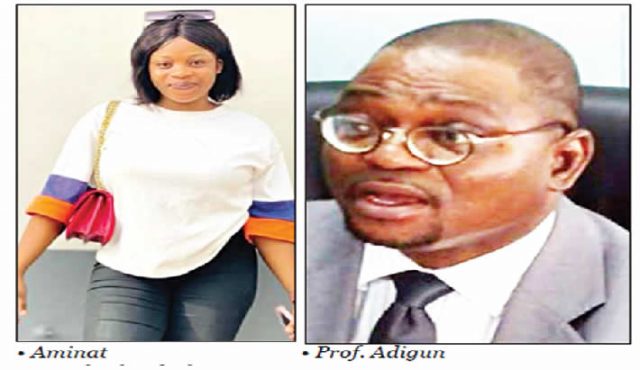 A Nigerian lady, Aminat Taiwo has narrated her experience in the hands of kidnappers.
Taiwo, who is one of the released victims of the Lagos-Ibadan Expressway abduction narrated how her father paid N3.2m to her kidnappers before she was released alongside her friend, Tobi Orekoya.
Speaking to Punch on Monday, Aminat said her father took the ransom to the kidnappers deep in the forest, where they were held.
The victim, her friend and some other road users were kidnapped last Friday near the Sat Guru Maharaji Garden at the Ibadan end of the expressway.
The abductors contacted the families of the victims and demanded ransom ranging from N50m to N10m.
It was, however, reported that Aminat, her friend, a former Deputy Vice Chancellor of the University of Ibadan, Prof. Adigun Agbaje, and a student of the Moshood Abiola Polytechnic, Abeokuta, Ogun State, Olayemi Adejare, were released on Sunday after two days in captivity.
Speaking with our correspondent, Aminat lamented that they were not provided with food or drinks during the period.
She also claimed that some of the victims, who could not meet up with the deadline given to pay ransom, were shot dead.
The 22-year-old graduate, who described her ordeal as horrible, said they fell into an ambush of the kidnappers on their way to attend a friend’s wedding in Ibadan.
She said, “Those kidnappers were more than 30; they covered their faces. They were putting on army and police uniforms.
“They were armed to the teeth; they had guns, swords, knives and other weapons.
“They asked us to lie down and collected all our money and phones. They collected gold chains, wristwatches, and other jewellery.
“At first, we thought they just wanted to rob us, but to our greatest surprise, after stripping us of everything we had, they asked us to start moving inside a deep forest. We walked for more than two hours inside the forest. When we got to a place, they asked us to lie down.
“We were moving in the forest for several hours; they did not give us water or food. We licked water on leaves in the forest.
“For the two days I spent with them, we did not stay too long in a place before they moved us to another place.”
Her father, Kayode Taiwo, said the family raised N800,000 from donations across the world.
He, however, said family members and friends supported him before he raised the money demanded by the kidnappers.
He said, “Some people donated N1,000, N500, N200, N400. By the time we calculated everything, it was around N800,000.
“I paid N2m as ransom for my daughter, while her friend’s parents paid N1.2m. But I was the one that handed over everything to them at the hideout.
“When I was at Toll Gate, they asked me to wait there and collect the money the mother of my daughter’s friend was bringing. They told me I should come alone that the woman could not come to where they were.”
Meanwhile, the university don said he was lucky to be alive, as a bullet fired at him by his abductors grazed his forehead.
Adigun, in a statement made on his behalf by his son, Adewale, said, “It is a new day today, and I’m happy to be alive. I was released by my kidnappers yesterday evening (Sunday) after spending two nights in the thick forests of Ogun and Oyo states.
“I was shot in the head during the abduction process. I thank God that the bullet that went through my car’s windscreen left only a skin-deep wound on my head, even though it left a gaping hole in the cap I was wearing.
“As stated earlier, my heart goes to those young female undergraduates, the young men and the middle aged person I left behind with the kidnappers. I may not be reachable now but as soon as I get medical clearance from my doctors, I will be thanking all of you personally.”
The Oyo State Police Public Relations Officer, Adewale Osifeso, confirmed that the professor had been released and was undergoing “medical intervention.”
Top Stories