Bamidele, who was led in evidence in the trial within trial, narrated how Chidinma was arrested and how she was interrogated. 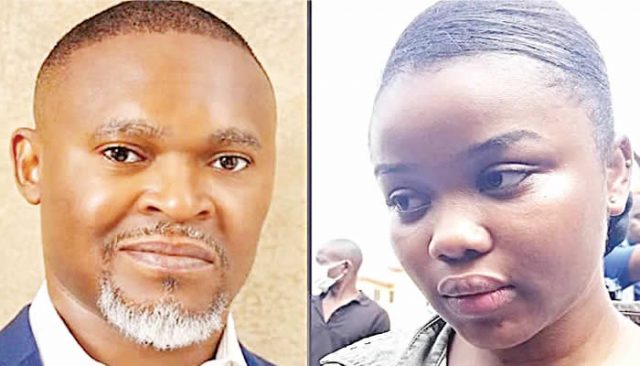 A police witness has told a court how Chidinma Ojukwu and her foster father, Onoh Ojukwu tried to cover up the murder of Chief Executive Officer of Super TV, Usifo Ataga.
Deputy Superintendent of Police, Olusegun Bamidele, on Tuesday, told a Lagos High Court sitting at the Tafawa Balewa Square that Chidinma Ojukwu, that Chidinma and her foster father, Ojukwu did not tell the police the truth on the incident.
Bamidele, who is serving with the Homicide Section of the State Criminal Investigation Department, Yaba, disclosed this while being cross-examined by Chidinma’s lawyer, Mr Onwuka Egwu, during trial within trial.
Chidinma, a 300-level Mass Communication student of the University of Lagos, Akoka, is standing trial over the alleged murder of Ataga.
She is also charged with stealing and forgery alongside one Adedapo Quadri and her sister, Chioma Egbuchu.
On the last adjourned date, Bamidele, who is the ninth prosecution witness, told the court how Chidinma transferred the sum of N5m on June 15, 2021, from Ataga’s account to another account.
Bamidele said after the arrest of the first defendant on June 23, 2021, her statement was recorded on June 24, adding that she confessed to killing Ataga.
When the prosecution sought to admit the statement in evidence, Chidinma’s counsel, Egwu, refused, saying she did not make the statement voluntarily.
The prosecutor then prayed the court to conduct trial within trial for Chidinma.
Consequently, Justice Yetunde Adesanya adjourned the case till November 8 for trial within trial.
At the resumed hearing of the matter on Tuesday, the Lagos State prosecuting counsel, T. E. Onilaja, announced appearance while Egwu also announced his appearance for the first defendant.
Bamidele, who was led in evidence in the trial within trial, narrated how Chidinma was arrested and how she was interrogated.
When asked during cross examination by the first defendant’s lawyer to confirm that four people were arrested when his team visited 25, Akinwumi Street, Alagomeji, Yaba, he denied, saying three people were arrested.
He said, “That night on June 23, 2021, the first team that visited came back with three people: the first defendant, Chidinma Ojukwu; her foster father, Onoh Ojukwu; and an underaged girl. Those were the people I saw. I was in the second team that visited the address that night.”
Asked the day the first defendant was paraded at the police command, Ikeja, he said on June 24.
The counsel then asked if he was aware that prior to the parade, the first defendant and her foster father had an interaction with the Commissioner of Police at his office, he said he was not aware.
When asked to confirm that Mr Ojukwu was re-arrested on July 25 and kept in detention till August 19, 2021, he answered in the affirmative.
Asked what Mr Ojukwu and a 10-year-old girl were doing in police custody, the witness answered that Ojukwu said he was embarrassed by what Chidinma did and offered to assist in investigation.
He said, “Mr Ojukwu was not kept in the cell; he was kept in a protective room and he received and escorted visitors at will.
“In the course of him staying with us, we stumbled on intelligence that there was an amorous relationship between the first defendant and her foster father. That gave the impetus that Mr Ojukwu was not sincere and that he was aware of the offence that she is standing trial for today. That she (Chidinma) was concealing vital information.
“We also established that the mother of the first defendant never approved the custody of the first defendant to Ojukwu and it was on this basis that we charged him to court alongside three defendants at the magistrate’s court so that the court could decide if he could get bail, including one Babalola.”
The case was adjourned till November 10 for continuation of trial within trial.
Top Stories