The defectors were formally received by Governor Bello Matawalle of Zamfara State and the APC National Vice Chairman for North-West Vice, Salihu Lukman. 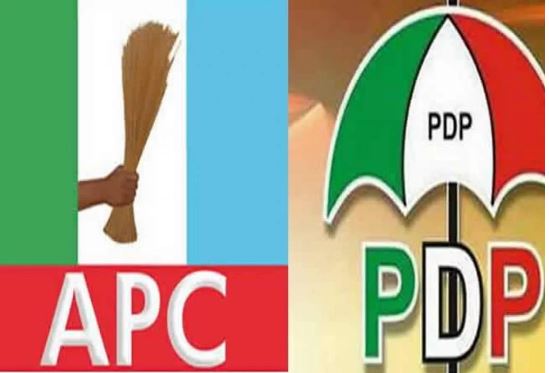 Supporters of the presidential candidate of the Peoples Democratic Party, Atiku Abubakar have dumped the party and crossed over to the All Progressives Congress on Friday.
Punch reported that the 10 political support groups dumped PDP for APC in Zamfara state.
The groups comprised Atiku Support Organisation, the PDP Transformation Ambassadors, Atiku Abubakar Kawai, the PDP Mobilisers Initiative, Kasa Daya Al’umma Daya, Atiku-Okowa Frontiers Movement, G7 Business Community, Katsina Biyayya Forum, Atiku Women and Youth Initiative as well as Atiku Nigeria Transformation Ambassadors.
The defectors were formally received by Governor Bello Matawalle of Zamfara State and the APC National Vice Chairman for North-West Vice, Salihu Lukman.
A statement jointly issued by the APC North-West Publicity Secretary, Musa Mailafiya Mada and the spokesperson for the North-West Presidential Campaign Council, Mohammed Shehu, disclosed that the official handover of the PDP and Atiku support groups took place after a marathon meeting that lasted hours.
The statement partly read, “These are groups who were committed to support the PDP and Alhaji Atiku Abubakar to win the 2023pPresidential election but were not given the deserved recognition by both the PDP and Atiku.
“The groups include Atiku Support Organisation, PDP Transformation Ambassadors, Atiku Abubakar Kawai, PDP Mobilisers Initiative, Kasa Daya Al’umma Daya, Atiku/Okowo Frontiers Movement, G7 Business Community, Katsina Biyayya Forum, Atiku Women and Youth Initiative and Atiku Nigeria Transformation Ambassadors.
“They are groups that invested heavily in the Atiku project since 2015 but noting that poor relationship with both the PDP and Atiku compelled them to leave both the PDP and its presidential candidate and declared their support for the APC and its presidential candidate, Asiwaju Bola Tinubu.”
While welcoming the groups, Matawalle, who doubles as the Zonal Coordinator of the Presidential Campaign Council, called for their full integration into the APC and Tinubu-Shettima Presidential Campaign Council.
He said, “The APC is the only party that uphold to the principles of power rotation, saying the highest justice to be done to the people of the South is to be able to shift power to their region for justice and equity.
“I, therefore, urged you to uphold the commitment we have exhibited over the years for the victory of the APC and all its candidates at all levels.”
The governor also told the defectors that Tinubu had mapped out strategic development plans that would help consolidate the existing reforms under the President Muhammadu Buhari.
Top Stories