Following his eviction last Sunday, Kiddwaya has finally revealed the housemate he is supporting to win the show. 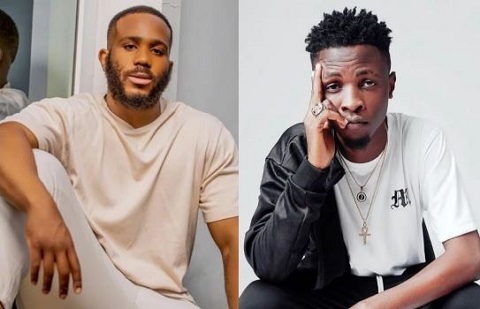 Kiddwaya and Laycon
Evicted Kiddwaya has stated that he believes Laycon will win the show.
He made this known in a recent interview with African Magic.
“I want Laycon to win and I think he will win, in the start I thought Neo would when I was in the House,” he said.
On why he thought Laycon would win, he said: “When I actually heard his music for the first time, when they played it by then I was on my own vibe I didn’t really listen to it, I just saw people jumping around him doing this and I didnt know it was him so I think I told the DJ to turn it up and told everybody to calm down so I can hear it.
When I first heard the song I realized that I see a lot of potentials in this boy and I felt like music really uplifts people, it really makes them feel high when they feel low it gets them out of tough times especially in this country and I know that with him winning I felt like he would do more with that win in terms of other people and I felt that with him winning he would do more with that win in terms of people so I felt like he would be able to really touch some peoples life no matter how low or high up.”
Top Stories