Reality star and actress Erica has left a message to her fans following a messy fight on Twitter yesterday. 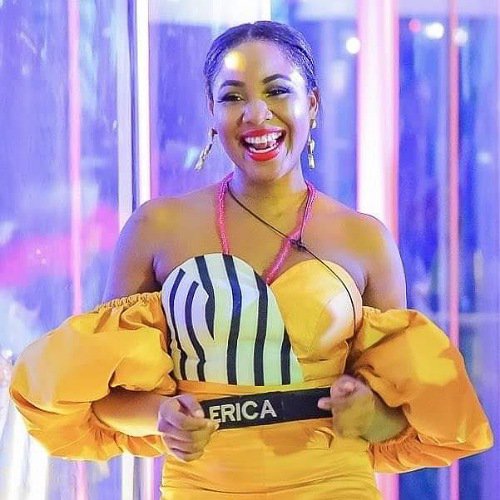 Erica
Disqualified ex-BBNaija housemate, Erica has left a message for her fans after fans of Laycon referred to as Icons dragged her following Laycon’s genotype revelation.
Recall that Erica's fans called Elites also defended her on Twitter.
Reacting in a post, Erica thanked them for standing by her.
The whole bad blood started the day Erica got disqualified for insulting and threatening Laycon and broke other BBNaija house rules.
Erica later apologized for her comments thrice; first to the housemates, then to Big Brother, and later in a post-BBNaija video, in which she offered a passionate apology to Laycon, the housemates, and to the viewers of the show.
Yesterday when Laycon revealed his genotype as SC, his fans and trolls took the opportunity to drag Erica alleging that she knew about his medical condition and that was why she said Laycon won’t live beyond 50 years.
However, Erica's fans defended her which resulted in a messy fight on Twitter yesterday.
They went to the extent of even tagging popular Nigerian singer, Teni a tribalist for calling Erica “Omo Igbo” in a video.
Overwhelmed with how the Elites trooped to micro blogging platform, Twitter to defend her against Icons and trolls alike, Erica took to her official Twitter page to appreciate her fans for standing by her.
She tweeted… “Elites.. God gave me my new family,” she tweeted, adding, “I’m no longer alone, I thank God everyday I have you! I will make you proud! You make me feel loved!”

Elites.. God gave me my new family, I’m no longer alone,
I thank God everyday I have you! I will make you proud! You make me feel loved! pic.twitter.com/yDYcVNxWQz