Nigerian Caught With 1.21 Kg Of Heroin In India (Photos)


A Nigerian man has found himself in serious trouble after he was nabbed by narcotic officials in India. 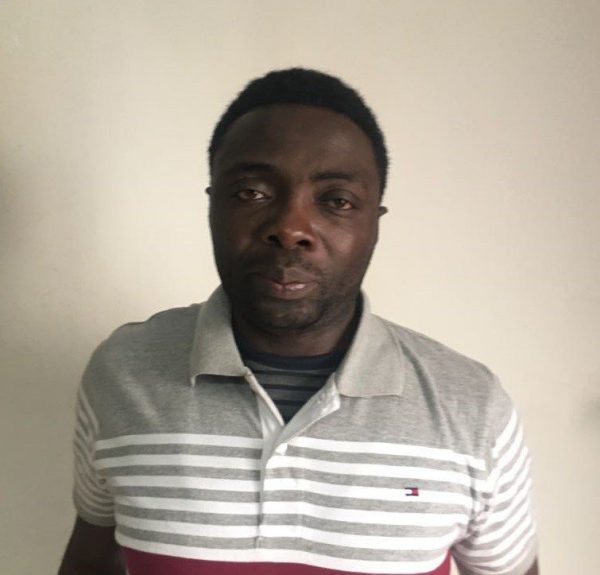 Madubueze Nonso Charles
In one of the biggest hauls of Narcotics Control Bureau (NCB) in recent times, a Nigerian citizen was nabbed with 1.2 kg heroin worth Rs six crore from Mumbai-bound Rajdhani Express at Vadodara railway station on Wednesday, Times Of India has reported.
The 38-year-old Madubueze Nonso Charles was travelling in A5 coach of the train before he was arrested around 3.30 am from the train by the Ahmedabad zone sleuths who had a specific information about him from the Delhi zonal unit.
“When we searched his luggage, we found three concealed food packets of pistachios and rice flour. On opening them, we found white powder and tests confirmed that it was heroin,” said Hari Om Gandhi, director of Ahmedabad zonal unit of NCB.
He added that Charles, who is living in Mumbai for four as a clothes trader, is only a carrier while the sender is the drug dealers. “During interrogation, he told us that he had received the consignment from another Nigerian. However, he has not revealed the name of the person,” said Gandhi.
“Charles was told that on reaching Mumbai he would get a call from a specific phone number. He had to tell his location to the caller,” said Gandhi.
NCB officials suspect that the receiver would also be a drug dealer as no consumer of heroin would buy the drug in such a large quantity. “Often those addicted to heroin, buy around 50 grams since it is a costly drug,” Gandhi said. 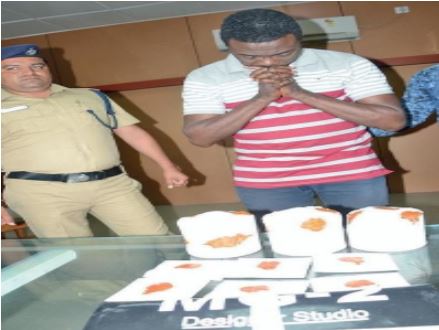 Madubueze with the heroin recovered from him
NCB will now be investigating about the frequency of Charles’s travels between New Delhi and Mumbai since he has admitted to carrying drugs consignment in the past as well. Though Charles had been living in Mumbai since four years on a business visa, he used to travel between Nigeria and India frequently. Whether he used to carry drugs during his trips between the two countries has not been known. On checking his passport, NCB officials also learnt that his visa had expired on February 28.
In June last year, another Nigerian citizen Peter Chinedu Okafor was nabbed from the same Rajdhani Express train with a drugs consignment worth Rs 3.5 crore. Okafor was carrying 255 grams of cocaine, 843 grams of amphetamine and 65 grams of ecstasy tablets. He had admitted of receiving US$ 150 for carrying the drugs.
NCB suspects that the heroin seized from Mamdubueze Nonso Charles is of Afghan origin. According to NCB officials, the heroin which is usually found in India is little brown in colour while the one seized was white, which is found only in Afghanistan. Lately, smuggling of drugs from Afghanistan through Pakistan has increased, officials said.
During interrogation, Mamdubueze Nonso Charles told investigators he is HIV infected. However, NCB will conduct medical tests to confirm this. “He must be saying that he is HIV infected so that we go soft on him or for gaining sympathy from us. But we will make him undergo a medical test to know the truth,” said NCB official.
Top Stories